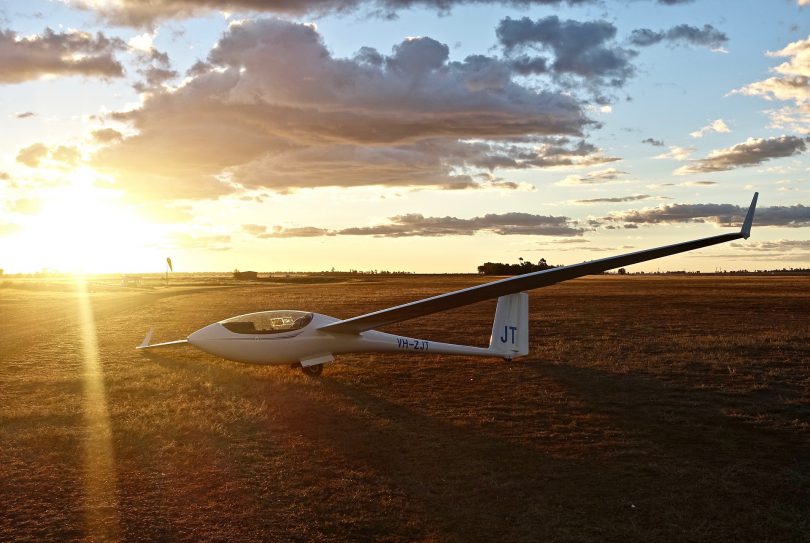 Image by Siggy Nowak from Pixabay

Unfortunately, people earthbound in cars miss a bounty of incredible color the state has to offer. The best way to see Colorado’s awesome scenery is to fly high above it in a smooth, quiet glider. From above, one can see more clearly Colorado’s vast color palette.

It is powerful air currents rising from the Earth’s surface that provide the means for glider pilots to silently soar above the landscape. These rapidly rising air masses, called thermals, are thought of only as turbulence by pilots of more typically powered aircraft, but they provide the lift needed to keep gliders aloft.

Getting aloft requires a tow from another powered aircraft, unless the glider is one of the few with a motor. Once up in the air, the glider can fly circular paths up the thermals in a smooth ascent to amazing heights. Gliders riding these thermals can climb to altitudes as high as 17,900 feet above sea level.

From that high up, there is a spectacular view of the land below and enough altitude to safely glide across large areas with no need for an engine. With no engine noise to distract those in the glider, they can fly effortlessly for hours savoring the striking scenery below, all viewed through a wraparound panoramic Plexiglas canopy.

Flights of 200 to 300 miles over Colorado and into New Mexico, Utah and Arizona are commonly flown by glider pilots in southwestern Colorado. Worldwide, the distance record for gliders is now over 1,800 miles. That’s a lot of miles filled with bursts of color best viewed from above.

A particularly colorful section of Colorado is found in the San Juan Mountains, which occupy more than 12,000 square miles of the southwestern part of the state. Often referred to as the “Swiss Alps of America,” the San Juans have more than 100 peaks that rise higher than 13,000 feet above sea level. There are also a handful more, known by ardent hikers as Fourteeners, which top 14,000 feet above sea level.

A section of a southwestern Colorado highway, known as the San Juan Skyway, runs in a loop through an especially colorful area. It passes through some former mining towns that have adapted to tourism and recreation as the mines played out. Running from Durango to Silverton to Ouray to Ridgway to Telluride to Rico to Dolores to Cortez and back to Durango, this popular route is driven by more than a million people each year.

There are also a series of rough, rocky, four-wheel-drive roads, called the Alpine Loop, which traverse the backcountry of the San Juans that thousands of people chug across each year. Earthbound drivers get a taste of the scenery but miss much of the incredible color within the skyway and the loop. From the air you get to see much of what they see and also so much more of what they miss.

Virtually every kind of geological feature and rock type imaginable, along with a varied biology, provide the magnificent colors found in the San Juans. With their rich geologic history, including intense squeezing, violent volcanic eruptions, massive ore body emplacement, several periods of glaciation and eons of erosion, the San Juan Mountains provide a visual feast for pilots, along with great flying conditions for gliders. With the snow mostly melted, and the sun high in the sky, the best colors are seen when flying from mid-July through late August.

Many areas of the mountains contain mineralized deposits, some of which were oxidized by underground solutions before the mountains were eroded into their present shapes. The result is a plethora of colors including intense crimson, coral, chestnut, citrine, tangerine, saffron, champagne, burgundy and amber from the iron-containing minerals. Much of this color is what attracted prospectors to the area more than 100 years ago, giving it its rich mining history. Silver Mountain, Gold Hill, Vermillion Peak, Sunshine Peak, Red Mountain, Cinnamon Pass, Green Peak, Yellow Mountain and Graysill Mountain are all appropriately named.

Lakes also add color to the view below. They run the gamut from the azure blue of Lake Hope, to the cornflower blue of Columbine Lake, to the steel blue of Clear Lake and the peacock green of Island Lake, with the variety of color due to differences in clarity, depth, glacial rock flour and mineralization.

In the summer, a wide variety of green hues are produced by a diverse plant life that includes ground-hugging alpine tundra vegetation and lush forests, standing tall. As fall arrives and chlorophyll production ceases, aspens and oaks bring forth a rainbow of yellows, golds, oranges and reds over a few weeks. The lush green alpine tundra turns a golden brown overnight after the first frost has set in.

Viewing this ever-changing kaleidoscope of colors from the silent serenity of a glider is not just reserved for the few who own their own sailplanes. Anyone daring enough to experience the beauty and thrills that come with the sport of soaring gliders can do so by dropping by a glider port or local airport to take a ride.

From up above the clouds, you’ll gain a new perspective on colorful Colorado. Right now, you’re only seeing a portion of the pallet from the window of your earthbound vehicle.

Bob Thompson is a retired college professor who splits his time between Arizona and Bayfield, Colorado. This article was originally printed in 2010.