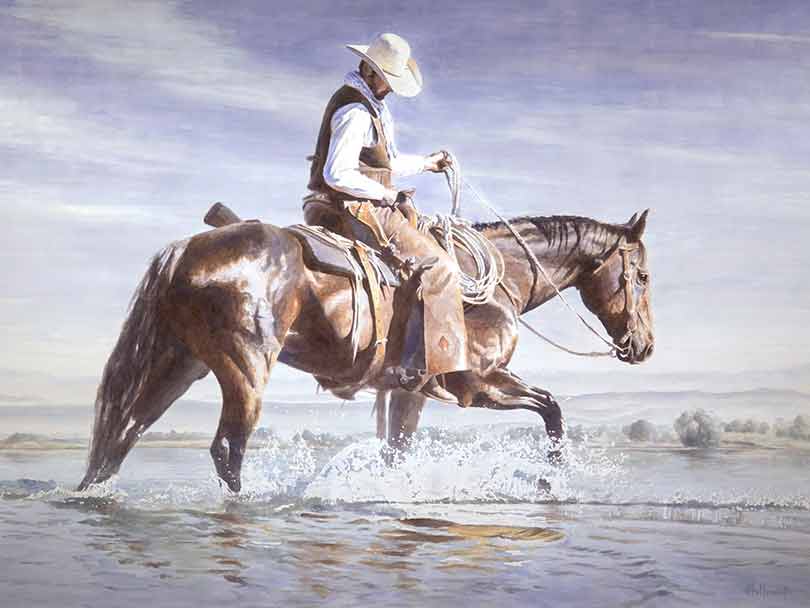 In March 2021, the Museum of Northwest Colorado invited the public to witness in person the unveiling of its newest exhibit: the world’s largest watercolor mural. With a carpentry background, artist and local resident Israel Holloway first built the structure of the mural and then began putting brush to canvas.

It took Holloway three months to complete the 16-by-10-foot mural, which showcases another local resident, Clint Chew, riding his trusty horse with unassuming details such as the model’s crest featured on his chaps and a representation of the saddle designed by his grandfather.

With COVID-19 restrictions still holding strong in late 2020, the folks at the museum decided to do a live feed of Holloway’s progress on Facebook. People from around the world, including India and Italy, tuned in regularly to the feed to witness Holloway’s headway. The museum’s assistant director Paul Knowles said people would write to the museum to let them know that, in light of all the COVID madness, watching Holloway was a wonderful diversion.

“It was extremely fun to watch,” Knowles said. “[Holloway] really helped out, not only the museum but the community. It was really good news in the community.”

More Reasons to Visit the Museum

Witnessing the world’s largest watercolor mural should prompt you to hightail it to Craig, but that’s not all the museum has to offer. Its Cowboy Collection features what Knowles calls “an absolutely astonishing public display” of antique guns as well as many other artifacts such as spurs, holsters, photography, and relics from infamous outlaw Harry Tracy and prominent figure of the Old West Ann Bassett, a female rancher in Brown’s Hole, now called Brown’s Park. As Knowles describes: “Smithsonian-worthy type items that usually end up in larger institutions.”

The museum itself is a relic of history. The 100-year-old building started as an armory built by the National Guard and was then converted to a community center, complete with a stage for activities such as plays, boxing matches and roller skating. It was transformed to a museum in the early 1960s after mammoth fossils were discovered in the area.

Fast forward to today and you can still view dinosaur fossils, stagecoach and railroad artifacts, and, soon, a new Fur Trading Exhibit which will house hundreds of memorabilia from the fur trading era.

Where is the museum?

See it for Yourself: Watch Holloway as he creates the world’s largest watercolor mural by visiting facebook.com/MuseumNorthwestColorado/videos or see a time-lapse video at https://bit.ly/3pdLOX9.