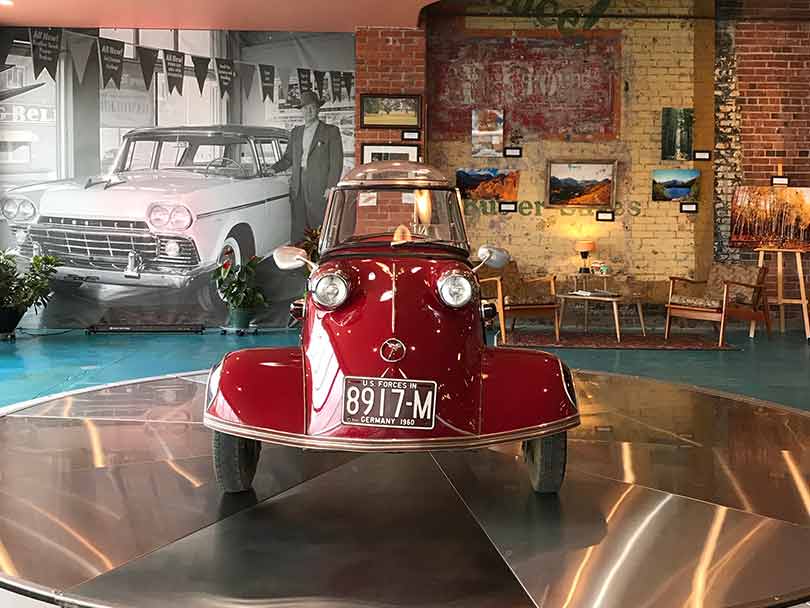 Photo of the 1955 Messerschmitt courtesy of The Orphanage.

Cars, Art & Ingenuity
When an old furniture store closed its doors in downtown Yuma in October of 2017, local businessmen Ron Wenger and Richard Birnie bought the dilapidated storefront on Colorado’s eastern plains. After a complete renovation, they reopened the building in 2019 as The Orphanage, billed as an “auto-themed gallery space.” The Orphanage quickly became an event-oriented harbor for northeastern Colorado’s flourishing art community, as well as a showplace for “orphaned” vehicles. Recently, following Wenger’s appointment to the Forney Museum of Transportation board and Forney’s mutual exchange program, The Orphanage has become the temporary home for some of the Denver museum’s vintage cars and carriages.

Why the name?
“Orphan cars are those whose manufacturers no longer exist,” Richard Birnie explains. That applies to the many vehicles on display at The Orphanage with names like Renault, REO, Messerschmitt, Studebaker and Crosley. Earlier this year, the space also included a collection of toy pedal cars and pedal tractors from private collections and the Forney Museum. And the facility has hosted a wide range of events, including anniversaries, high school proms and business meetings.

What’s coming at The Orphanage?
The Orphanage has showcased the work of dozens of artists, photographers, sculptors, quilters, authors, crafters and artisans since opening two years ago. September’s showcase was the “Yuma Art Association Sampler,” featuring the paintings and drawings of Yuma artists. The October show, called “A Wray Palette,” displays the talented work of artists Patti Bohall, Jody Buck and Cindy Musgrave. November 5 to December 5, the unique “anti-photography” from the camera of Tanya Flemister will be featured.

Visit The Orphanage’s website and see a list of guest vehicles currently on display and those previously featured at orphanageyuma.com/guest-vehicles.