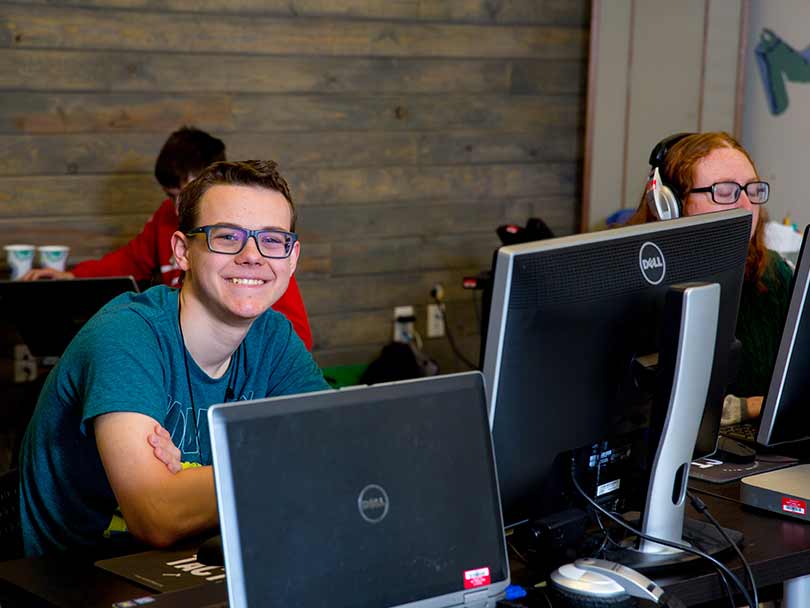 A TACT student brushes up on his skills.

It started with an orange 1975 Jeep Cherokee that had been sitting in a field for decades with a burned-out engine. To most people it would look like an eyesore destined for the junkyard. But Danny Combs saw it as treasure — the very thing he needed for his new nonprofit, TACT (Teaching the Autism Community Trades). 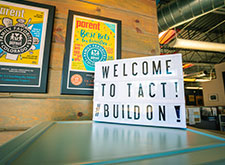 Danny was inspired to start TACT in 2016 by his son Dylan who was then 8 and had been diagnosed with autism at age 3. Danny had grown tired of going to therapists’ offices and listening to what was wrong with Dylan. Delayed speech. Issues with fine and gross motor skills. Toe walking. Dylan was defined by what he couldn’t do, but his dad saw more possibilities than problems in his son. He saw a bright, imaginative child. 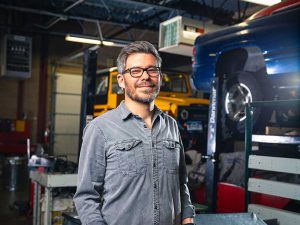 Danny didn’t just do something; he did everything. At the time, Danny, 35, was living his dream. He’d succeeded in the competitive music industry in Nashville. His day-to-day was working alongside Grammy- and Oscar-winning artists. It was heady stuff. He’d won a Grammy Signature Schools Enterprise Award for the music education program he developed. His future was bright. Assured. But for Dylan the exact opposite was true.

According to a 2020 report from the Centers for Disease Control and Prevention, 1 out of 54 children are diagnosed each year on the autism spectrum. The report also showed that people with autism have the highest unemployment rate in the country; 90% of them can’t find or hold a job in the best of times.

The odds were Dylan would grow up and never get a job. There was no road map for his son, no future. That was unacceptable to Danny. He was determined to map out a different future, not just for his son but also for others with autism spectrum disorder (ASD). He decided to move from Nashville back home to Colorado to be closer to family and an environment more supportive for Dylan. 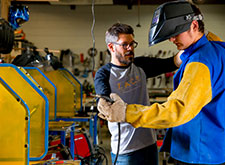 Danny refused to let the statistics stop him. As he read and researched, the numbers showed something else. Hope. Individuals with autism were ideal employees. Once they got jobs, they were incredibly loyal. They never left. They never called in sick. Perhaps the most startling statistic of all was this: The average U.S. worker is on task 48% of the time; an individual with ASD, 98%. People with autism were twice as productive, always on task, most likely not distracted by their cellphones and co-workers. Then Danny asked himself, why were people with ASD unable to get jobs?

As he continued to read and do research he discovered the answer: The issue was a slow learning curve. Individuals on the spectrum took longer to learn a job — an issue that was a deterrent for employers. Again, rather than seeing a problem, Danny saw possibility. What if he could offer the missing piece? What if he could train students on the front end to give students the tools they needed to be a success and to hit the ground running?

Danny decided to teach what he knew: skilled trades. He knew there was a demand and knew that, due to budget cuts, many schools had cut shop classes that taught essential skills like welding and carpentry. Associated jobs were lucrative and in demand. Danny grew up working on cars and building things. His father and grandfather taught him to work hard and problem solve. Together they worked on building houses, cars and furniture. He can still remember the satisfaction he got from keeping his own car running — a 1979 Volkswagen Beetle convertible. 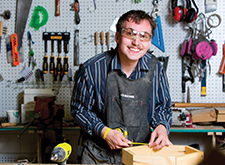 Student Chris “Scoop” Cooper takes a measurement while working on a carpentry project at TACT.

Danny had no background in starting or running a nonprofit — no background in starting or running a hands-on vocational training center. Plus, there was no template to follow — if his idea worked, it would be the first program of its kind. What Danny did have was a can-do attitude, a master’s degree in education, a background as a fourth-generation tradesman and a relentless desire to help his son.

TACT was founded in Denver with the mission statement: “To encourage and empower the full spectrum of individuals with autism through education and employment in skilled trades.”

In the beginning, the dream was big but the budget was small — $25,000 from a GoFundMe campaign. There was no staff, no headquarters or office space, just Danny and his dream. He and his then-wife, Claire, “rolled up our sleeves and went to work. We read a lot, talked to consultants and nonprofit experts, and asked people who were smarter than us,” he says.

The first project was fun: a ukulele building class in partnership with Stapleton Music Lab. Then came the infamous orange Jeep Cherokee. A friend graciously allowed Danny to turn his driveway into a classroom and conduct his first class there.

For Paul and Cindy, the parents of another boy with ASD who asked that we not use their last name, that Jeep Cherokee was a lifeline for their car-loving, mechanically-inclined son, Noah. 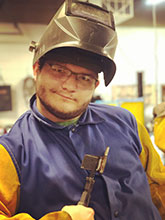 As Paul recalls, “One day an email popped into my inbox with the words auto, autism and class and I thought, ‘We have to be there.’”

Noah didn’t just love cars; he was obsessed with them and had an encyclopedic knowledge of them. He could identify a Mini Cooper or Hummer from his car seat at age 2. As he grew older, he could look at a car and tell his parents the factory it was made in and what issues caused a recall of a part. Prior to TACT, Noah’s parents had spent countless hours attending car shows and visiting Denver’s Forney Museum of Transportation to indulge his passion.

So, with regard to the class, “I can still picture that orange Jeep Cherokee in the driveway of a beautiful home in Cherry Hills,” Paul says. “It was TACT’s first auto class. There were about six kids there. Danny had this presence about him. He was calm. He just seemed to understand what our kids needed. Noah is a little uneasy in new social situations. Danny came up, talked to him and put him at ease. Each child could participate in a way that was best for them. The class bent to the kids instead of the other way around.”

TACT moved into a warehouse near Brighton Boulevard in north Denver and Noah continued to participate two Saturdays a month. Like many people, “Noah has a hesitancy to do something that he might fail at,” Paul says. “While working on a Jeep, Danny asked Noah to get the jack. Noah said, ‘I’ve got this.’ That encapsulates the whole experience. There was a confidence that continues to this day through being a part of TACT.”

Another TACT parent, Jennifer Alabiso, agrees. Her 10-year-old son has been attending TACT for three years — on school breaks, during summer and on weekends. “In school he is behind grade level in reading, but at TACT he can read blueprints and instructions,” she says. “Give that kid a power tool and something to build and he’s fine. TACT warms my heart and sometimes makes me tear up. It gives us a lot of hope.” 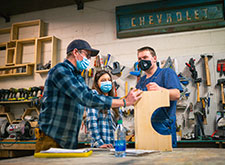 Noah graduated from high school in August 2020 and is now enrolled in the auto mechanic career program through TACT. “It meets a huge need in setting up Noah for success in the world of cars and mechanics,” Paul says. “It combines the technical skills of working on cars plus the social skills of interacting with others to keep a job and be a valued employee. There is nothing else like it in Colorado or the country. TACT works with a student until they are ready for success with a combination of technical and social skills to find a work location that appreciates what Noah can bring.”

Danny agrees. “A lot of organizations who work with individuals who have intellectual or developmental disabilities are deficit based,” he says. “In other words, they are trying to fill a quota. They try to get someone hired because of their disability. To us, that seems backward. Their talent gets them their job, not their disability. We showcase what our students can do, develop a portfolio and train them to do the job.”

In addition to teaching auto mechanics, TACT offers career tracks in carpentry, welding, computer science and electronics. TACT offers workshops and summer camps for students of all ages with classes in everything from photography to fiber arts, musical instrument building, auto mechanics, carpentry and more. While students have fun building an electric guitar or a box drum, they also learn math, problem solving and how to safely operate power tools. Best of all, they can take their projects home.

TACT can also go on the road. Literally. TACT will partner with schools, church groups and other community organizations to bring classes to other communities in a green 1958 Chevrolet.

The program is so unique that Peter Machnik, 20, moved from Chicago to Denver to participate. “I like the program and working with my hands,” he says. “I hope to find a job in carpentry.” 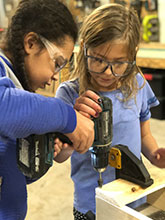 Students Ellie Combs and Cora Hansen concentrate on their project.

Not only does Danny offer these one-of-a-kind programs and opportunities to students with ASD, he makes it affordable. As Paul puts it, “As if this program can’t get any better, they help with the financial piece as well. They are aware of the financial burden of raising a kid on the spectrum.”

“We want it to be attainable for everyone. We work hard to find sponsors, fund raise and write grants to make it affordable for families,” Danny says.

Today, TACT is headquartered near the Broncos football stadium in Denver, has 12 staff members and has trained 750 students with an impressive 83% job placement rate. Graduates are working on the new Amazon. com headquarters in Colorado Springs and the Interstate 70 lighting project in Denver.

According to Paul, “Danny is on the forefront of a huge movement. He is a visionary. He looks at ASD as highly prized employees, not charity work. Our world needs these young people and their amazing skills and knowledge.” The program is so successful that employers like Blue Star Recyclers are now calling Danny to hire his students, not the other way around.

Danny hopes one day he can expand TACT across the country to empower more individuals on the spectrum.

What ever happened to that Jeep Cherokee? TACT students rebuilt the engine, rewired it, redid the suspension and brakes and entered it in the Castle Rock Car Club annual show where it won first place in the 4×4 category. As Paul remembers, “Noah got to accept the award and was beaming. It was a great day.”