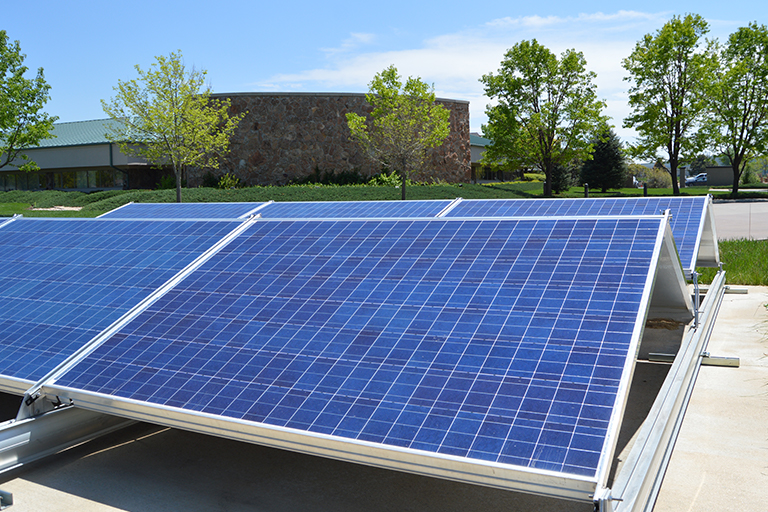 Electric cooperatives are faced with the challenge of meeting the energy needs of their member-owners while meeting legislators’ expectations of increased renewable energy options. But “going 100 percent renewable” — a common statement in recent years — is an unrealistic undertaking without the appropriate tools.

One possible solution to these expectations is a new generation of large batteries that could capture energy when it’s plentiful and release that energy later when demand is high. Batteries are a hot topic for meeting those new demands, and some experts predict that utility-scale use of batteries could grow by eight times in the next three years.

ZEROING IN ON BATTERY STORAGE
Poudre Valley Rural Electric Association in Fort Collins is presently exploring the benefits of battery storage with a sonnenBatterie Eco Compact 10 kilowatt-hour system in its community room. The battery charges during the day from the solar array located right outside the co-op’s doors.

“Using control software, we discharge that energy for use in our building,” says PVREA’s vice president of member relations, David White. “This energy is particularly beneficial to discharge at a peak time in the day — when the cost of energy is the highest.”

This battery system was made possible with a Regional Center Grant PVREA received from the National Rural Electric Cooperative Association to research technology that is groundbreaking. According to White, this technology could potentially offer new, beneficial products and services for co-op member-owners.

“Utilizing the battery in our co-op headquarters has enabled us to start learning how battery storage technology helps us manage our energy use, thus how similar battery technology could help PVREA members manage their energy use,” White explains. “It’s another way we’re striving to be our members’ trusted energy advisor by understanding, embracing and exploring technology that is changing our industry and how members receive service from us.”

“The method for how battery technology integrates into the already existing local grid with the local distribution utility, and with the generation and transmission utility as well, is still being researched and determined,” White adds.

THINKING BIGGER BATTERIES
Another Colorado electric co-op, United Power in Brighton, is also starting to research battery storage. It is looking at a largescale battery storage system that would store excess solar energy generated during the day to be released at night. This could help solar and wind energy continue to gain ground in the renewable sector with energy generated when the sun is shining and the wind is blowing that could be utilized later when it is needed.

According to United Power’s new business director, Jerry Marizza, plans are in the works to have SoCore Energy install a Tesla lithium ion battery storage system to help offset United Power’s capacity charges with its wholesale power provider, Tri-State Generation and Transmission. The capacity component of a wholesale power bill recognizes peak usage over a period of time, which can increase the bill.

“That’s what gives [United Power] the revenue stream to offset the cost of the battery. That’s our primary purpose for putting this battery in — it’s really to lower our wholesale power bill,” Marizza says. “Secondarily, we feel that operating and getting experience with this technology is critical in the future.”

This battery storage system could be significant for a specific group of members: commercial and industrial (C&I) customers. There are 2,500 small solar systems in United Power’s territory; 10 of those systems are used by C&I customers. These customers are billed on a demand and energy rate, but their peak demand is mostly when the sun isn’t shining or it’s a cloudy day.

“Even though you have a system at your commercial site or you’re participating in a community solar model, you cannot offset any portion of the demand component on your commercial and industrial bill,” Marizza explains. “That can be as high as 50 percent of your entire bill. It becomes a part of your bill the solar is not affecting at all. That’s been a problem.”

Which is why many C&I members don’t participate in solar. With these members in mind, United Power is beginning to explore options. Using the community solar concept that offsets energy, United Power representatives are thinking about layering a program on top of the battery to create a “community battery” that C&I customers can buy into.

“Instead of offsetting the energy portion of their rate like solar, it offsets the demand and capacity component of their utility rate, which, up until now, nobody has been able to touch,” Marizza says. “That could have a very big benefit for our C&I customers.”

Because residential customers are on a flat energy rate, they don’t need to participate in the community battery because they don’t have a demand component on their bill to offset like C&I customers.

Just like community solar, a community battery program would be owned, operated and managed by United Power. C & I customers would be invited to participate and buy into the program, and then United Power would provide credit on the capacity component of their utility bills.

With the push from legislators for utilities to move toward 100 percent renewable energy, United Power is investigating how — or if — it can realistically reach that goal. “Batteries are one of the technologies that are going to need to develop further to even come close to trying to get some of those goals,” Marizza says. “From an operational point of view, that can’t happen today. We need to develop some of these other technologies and get experience operating them to be able to even come close.

“We feel, on a secondary level, that getting experience with battery storage and how it actually operates is very important,” Marizza continues. “We feel that ultimately that this experience is what’s going to allow us to integrate more renewables onto the grid.”

United Power wants to help pioneer this new renewable energy option just as it did in 2009 with its community solar farm, which was the first electric utility solar farm in the country. The battery storage project is expected to break ground later this year. Initially, United Power will use this battery to offset the capacity component of its wholesale power bill. Once the research and understanding of the technology is determined, the community battery program could become reality.

And, then, electric co-ops will have another tool to use as they continue to bring more renewable energy into their systems.