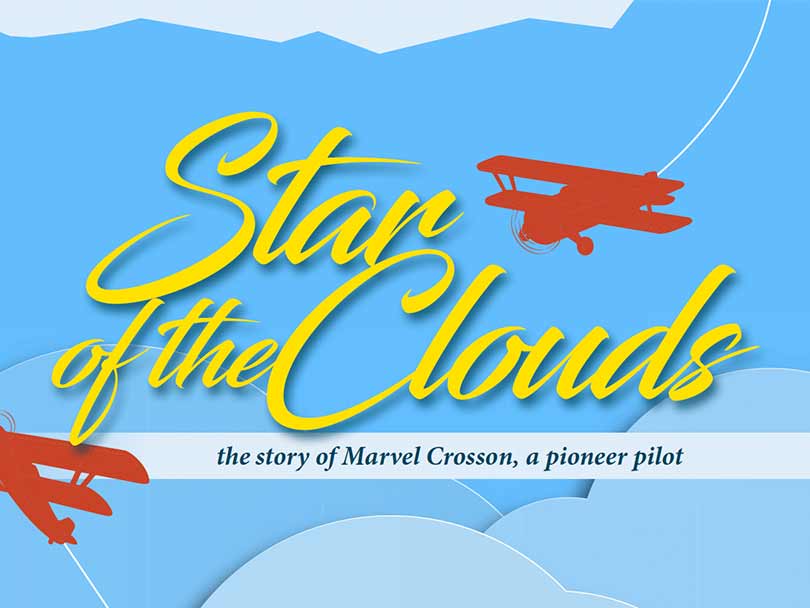 It’s the summer of 1917. A teenage Marvel Crosson and her young brother, Joe, stand in awe before a flying machine at the Logan County Fair in Sterling, Colorado. It isn’t much: an early model made of a flimsy frame and fabric with a rear propeller and a tiny seat barely big enough to carry the pilot. But still, for Marvel and Joe, watching that rickety contraption miraculously defy gravity was the moment that changed their lives forever. 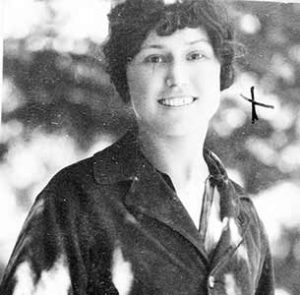 It would be six years before the siblings could live out their dream of getting up in the air, but they never abandoned it. On a family vacation to California’s Dutch Flats airfield, they begged a bored pilot to take them up in his open cockpit two-seater aircraft, and for their combined $2.50, he agreed. The siblings returned to earth even more inspired to become pilots themselves.

Originally from Indiana, the Crosson family stayed in Colorado long enough for Marvel to graduate from the Logan County High School in Sterling before moving to San Diego, California. It was there that Marvel and Joe worked odd jobs and saved their pennies to purchase a Curtiss N-9 seaplane for $150. They repaired the plane in their backyard, slowly replacing broken and missing parts as they could afford them.

An old World War I training plane, the machine had been sitting in pieces in a warehouse for years. Marvel and Joe saved more money to pay $125 for an old boat motor to make it run, as well as landing gear that could replace the original floats. They eventually also completely replaced the fuselage and covers on the wings. 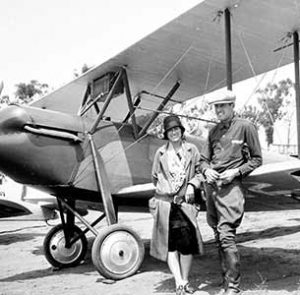 Marvel agreed that Joe should take his flying lessons first, then teach her after he received his license. As their younger sister, Zelma, remembers in her biography of her sister, “Marvel worked and earned money to finance Joe’s instructions, doing more than her share in their partnership. Joe soloed in June 1924 and at the same time he and Marvel were able to purchase the unassembled parts of their aeroplane.”

Marvel finally got her chance to fly a year after her brother, taking her first solo flight on June 20, 1925. When Joe turned the controls over to Marvel, he knew the men at the airport wouldn’t believe a girl was actually the pilot, so he stepped out onto the wing as she made a pass by the hangars so no one could claim they were lying.

Not long after teaching Marvel to fly, Joe received an offer from a company out of Fairbanks, Alaska, to pilot passengers, mail and supplies throughout the remote Yukon territory. Joe couldn’t pass up the amazing opportunity to fly for good pay, though Marvel was sad to see him go. She spent the next year logging hundreds of flight hours and saving money by working at a camera store.

Already locally famous as a rare female flyer, it was rumored in the newspapers that Marvel was itching to join her brother in Alaska. In her own letters to a former teacher, however, Marvel made clear that she didn’t want to always be known as Joe’s sister. He was making a name for himself as a long-distance pilot and, though she celebrated his success, she wanted to make a name for herself as a pilot on her own terms. 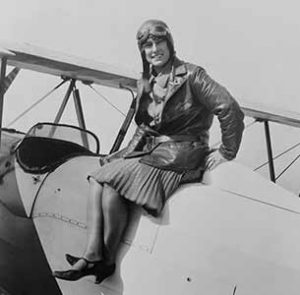 Marvel Crosson became the first female pilot to earn a commercial license in the Territory of Alaska.

Still, she couldn’t resist the opportunities afforded by her brother’s connections in the far north. In 1927, still in her early to mid-20s, Marvel became the first female pilot licensed by the state of Alaska. She was officially a professional flyer, one of only 70 female pilots in the entire United States and the only one with experience in the Yukon.

Newspapers all over the country loved talking about the “pretty aviatrix.” Marvel became known as “Pollyanna of the North” and “Alaska’s Aviation Grocery Girl,” with pictures of her posing in her heavy fur coat next to her plane scattered across front pages throughout the lower 48 states.

Alaska flying wasn’t all fame and fortune, however. Though fervor for aviation was growing and remote areas benefited, pilots were not generally welcomed by many people in the north. Planes stole much of the work formerly given to sled dog teams, and the locals resented the change and loss of jobs. Many places of business put up signs in the windows: NO DOGS NOR PILOTS ALLOWED.

The freezing weather also made flying complicated. “It takes hours to get your planes warmed up and then the daylight is all gone nearly,” Marvel wrote. “Even the hangars and sheds are cold (and) you have to work in mittens or your hands would freeze fast to the metal parts.” Still, she seemed to love the freedom and beauty she found in the frozen wilderness. She was being paid to do what she loved most.

But Marvel had plans to push her flying even further, and that required returning to California.

In 1928, two pilot friends of the Crossons enlisted Joe’s help to complete a flight across Antarctica. Joe was tasked with picking up the expedition’s Lockheed Vega airplane from the factory in Los Angeles and flying it cross-country to New York. He asked Marvel to join him. Together, they took turns flying the plane to cover the over 2,700-mile journey across the country.

The pair parted once they finally reached New York after the grueling trip. Joe boarded a ship headed to Antarctica, and Marvel bought a ticket for the slow train ride back to the West Coast, stopping to visit family along the way. 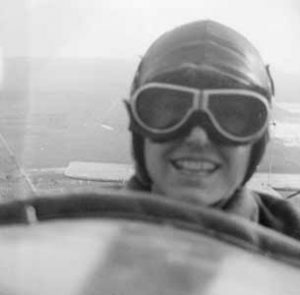 Marvel Crosson on one of her many flights.

Once in California again, Marvel had no plans to return to Alaska. Instead, she set her sights on a new challenge: beating the altitude record previously set by Louise Thaden at 20,270 feet. A sponsorship with Union Oil gave her access to an open-cockpit Beechcraft Travel airplane and a barometer to record her flight data.

During her first attempts with the new equipment in February of 1929, Marvel encountered even more difficulties with cold than she had in the frozen northern states. “I tried for two hours to get higher than 20,000 feet, but finally the gasoline began to ice up in the carburetor and the motor began to lose its heat, so I had to come on back,” she wrote. Her success would require an equal measure of skill and good timing with the weather.

It took her until May of that year and a new airplane to finally reach her goal, surpassing the previous record with a peak altitude of 23,996 feet. Though she had been well-known before, now she was a household name, with newspaper coverage of her achievement rivaling attention given to Amelia Earhart. Photos of Marvel in her flight suit covered front pages everywhere, and she was dubbed the “New Star of the Clouds.”

The whole country was poised with excitement to watch Marvel perform as the first entrant in the inaugural Women’s Air Derby cross-country race.

She already won the first sanctioned women’s air race between Palo Alto and Oakland, California, in April, so Marvel was excited and confident about the derby. She also had another reason to be excited: a quiet engagement to fellow pilot Emory Bronte. The two planned to be wed sometime soon after Marvel completed the derby race. Both Emory and Joe were eagerly waiting at the finish line in Cleveland, Ohio. 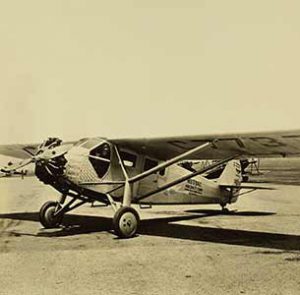 In order to participate in the race — nicknamed the Powder Puff Derby by humorist Will Rogers — all pilots had to prove at least 100 hours of solo flying experience, including 25 hours of cross-country flying. The racers would make their way to Cleveland by way of 10 stops through Arizona, Texas, Missouri and Ohio. The first leg of the race had the pilots flying from Santa Monica to Yuma. After proving they had the proper certificates and experience, 19 female pilots including Marvel and Amelia Earhart took off on Marvel Crosson in a Ryan Brougham days before she died on August 19, 1929, in a plane crash in the Arizona desert. August 18, 1929, from California, cheered on by over 100,000 spectators.

Marvel flew a Travel Air Speedwing Chaparral provided by her continuing sponsor, Union Oil. Its cruising air speed of 160 miles per hour was faster than any other plane in the competition. That, in combination with her extensive flying experience, made her the pilot to beat.

Though Marvel and Joe had complained of engine trouble in the new plane after transferring it from Wichita, Kansas, to California, a few repairs seemed to have done the trick. Marvel reported that the plane flew just fine between California and the first stop in Yuma.

When she didn’t appear at the next stop on the derby, alarms were raised and her probable route was traced. Her plane had been spotted flying low by a 6-year-old girl in Wellton, Arizona, before it dipped below the tree line. Searchers followed the girl’s directions and found the plane’s wreckage in a ravine. Marvel’s crumpled body was found nearby, wrapped in her partially-opened parachute.

To this day, no one knows for sure what caused the crash that ended the career of such a young and promising pilot. Some surmised engine trouble, and that Marvel’s Yukon training might have led her to stay in the plane too long before trying to jump free. When other pilots reported mysterious malfunctions in their aircraft throughout the rest of the derby, rumors of sabotage swirled but were never proven. 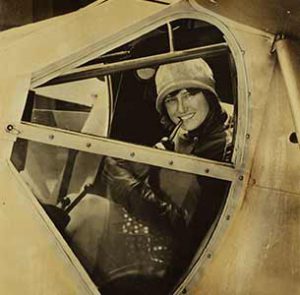 The legacy of Marvel Crosson lives on in the memory of Coloradans.

No matter the cause, the life of the famous female flyer was cut tragically short. Still, the legacy of Marvel Crosson lives on in the memory of Coloradans. Today, the Sterling Municipal Airport is known as Crosson Field. Across town, visitors to the Overland Trail Museum can see a leather flight helmet that Marvel wore on many an aerial excursion, along with pictures that capture her bright smile, natural beauty and adventurous spirit. Maybe Marvel’s legacy will live on through some other little girl who visits the museum and is inspired to find her own wings.

As we celebrate National Aviation Day on August 19, we can only wonder what Marvel might have accomplished if she lived beyond her 30th birthday, especially when you consider the unbelievable feats she achieved before it. She may have only lived here for a part of her life, but Colorado is still proud to claim the title as the state where she was inspired to take to the skies.

Freelancer Julie Simpson loves writing about the amazing people and places in her home state of Colorado.