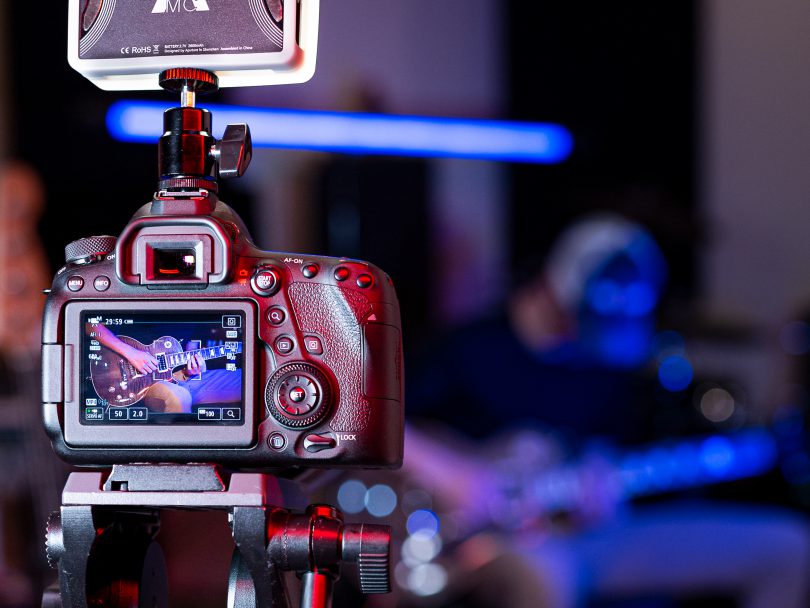 Our biggest surprise on this journey has been the friends from around the world that we have met,” explains Denise Knowles, one-half of the YouTube channel team, Colorado Martini. “We’ve made friends with people around our age who are into the same things.”

The 50-something couple, who live in Hygiene, a small Boulder County town, was looking for a creative outlet after serious day jobs — Patrick is a warranty manager for a construction company, and Denise works in information technology at the University of Colorado Boulder. Their friends were entertained at parties with Patrick’s ability to make flavored martinis — hence the name of the channel. “Our friends were also amused by how we interact with each other, so what initially was an idea for a book became live videos.”

The Knowleses aren’t the only Colorado residents who enjoy contributing to this video-sharing internet platform. YouTube began on April 23, 2005, when the first video was uploaded by one of the founders, Jawed Karim. He and his partners, Chad Hurley and Steve Chen, sold the startup to Google in October of 2006 for $1.65 billion. Since then, the website has skyrocketed. Currently over 2 billion users visit YouTube each month and every day people watch over a billion hours of video generated by YouTubers like the Knowleses.

It took a year for the Hygiene couple to find their voice and hone in on a few areas of interest after starting with a cocktail and lifestyles theme. Exploring new destinations, history and even the lore behind haunted buildings became their focus. Denise’s enthusiasm and passion for the topics are evident and contribute to why they were selected as a Top 30 Colorado YouTube channel by Feedspot.com. 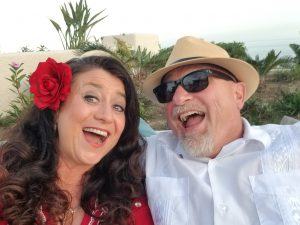 Denise, as a software engineer and geophysicist, performs the technical requirements for the channel. As an empty nester, Denise started making private videos about lifestyle to teach the world. With a graduate certificate in adult online learning, she now uses YouTube to “teach with a modern twist.” Husband Patrick assists with ghost-hunting technical gear, does all the driving and “makes us all laugh.”

Their passion for travel, as well as creating community and teaching, has evolved over the past four years into the creation of 107 videos and a virtual community of friends and followers from around the world.

One of their most watched segments is a walking tour of Deadwood, South Dakota, in the Black Hills. The small town was featured in an HBO movie, so Denise and Patrick went exploring. Viewers learn that Wild Bill Hickok and Calamity Jane visited the town, which traces its roots to 1874 when Gen. George Armstrong Custer arrived to establish a fort, where gold was discovered and a gold rush followed.

Another video with almost 3,000 views is her tour of the historic and elegant Brown Palace Hotel in downtown Denver. Denise invites viewers along as she enjoys afternoon tea in the atrium of the unique, triangular-shaped hotel.

Their story of haunted Cheesman Park in Denver prompted a viewer to comment on what excellent storytellers they were. Inspired by the praise, they produced a video on the presumably haunted Stanley Hotel in Estes Park, and have continued conducting paranormal investigations.

YouTube acknowledges that its community keeps growing thanks to individuals who contribute worthwhile content for others to view. Another Colorado resident who does his part is Kerry Norman from Louisville. 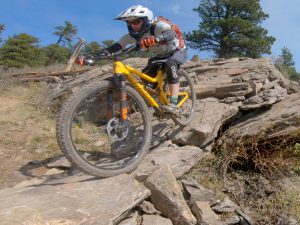 Kerry Norman shares his love for the mountains in his YouTube channel Roaming 50.

Of course, when many people think of Colorado, hiking and mountain biking come to mind. The Roaming 50 channel was started in 2008 by this passionate rider, who moved to Colorado from the United Kingdom. He started as a hiker, but realized a mountain bike could help him get deeper into the wild and away from more people.

Norman admits that carrying cameras, batteries, a gimbal for stability and other audio and video paraphernalia on a ride can be cumbersome. And then there is the 10-plus hours of editing it takes to create a 20-minute, professionally-produced video. But mountain biking changed his outlook on life and lifted him out of a depression. He finds it therapeutic and hopes that, by presenting new riding challenges and destinations, he, in turn, is helping other riders.

Since he likes to continually explore different terrain, he makes videos to expose riders to new trails. He prefers raw natural terrain over landscaped parks and provides educational content to share with new riders on what to expect when riding. He holds the audience’s attention by talking to them as if they are riding with him.

His day job provides regular income so Norman produces intermittent videos to indulge in his passion and to express his creative side. His true ulterior motive is to show his kids the cool stuff their dad used to do before he got too old.

Thirty-one-year-old Chad Richardson also started making videos to share his newfound love of the beauty of Colorado with friends from his small hometown in Pennsylvania. He moved to suburban Thornton in 2014 to start a new life. To get in shape and help his recovery from Lyme disease, he started hiking. 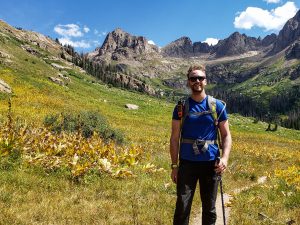 Chad Richardson shares a view from the top of a Colorado peak. Take a hike with him on his YouTube channel Hiking in Colorado.

His first hike up the Flatirons in Boulder “was the hardest thing I’ve ever done.” But with the view from the top, he was hooked. “They don’t have mountains like this back home, so I started documenting my climbs to share with friends, and it just took off from there,” Richardson said. He’s since discovered that he loves creating moments in time that will be forever captured in videos.

Documenting hikes for the Hiking in Colorado channel, Richardson started out using his phone, but as viewership started growing he watched “tons of tutorials” on how to make great videos and invested in better equipment. The quality that comes from his Panasonic G 85 with a Rode VideoMicro must be why his channel was voted Top Colorado YouTube Channel and Top YouTube Channel for Hikers by Feedspot.com in 2018 and it continues with that designation.

The channel, which includes informative and articulate descriptions of hikes with detailed route conditions along with backpacking and camping related topics, has its 45 videos broken down into categories: tutorials, 13ers, 14ers and day hikes. With 44 Colorado 14ers and 26 13ers under his belt as well as more than 100 summits, including Mount Elbert, the highest mountain in Colorado, Richardson continues to be enthralled by the breathtaking beauty and unexpected history he learns about on his hikes. “Stumbling upon old mining equipment feels like stepping back in time and getting a glimpse into the history of Colorado,” he says.

Boulder resident Roman Mica turned a perk from one job into a whole new career. As an on-air news reporter and member of the Press League, he had access to brand-new vehicles to review. What started out as a blog turned into a YouTube channel. His naturally curious mind and journalistic approach made him a natural reviewer for new automobiles. 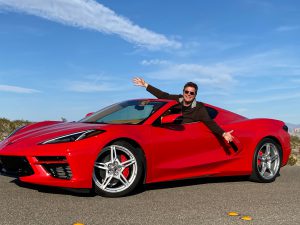 Roman Mica takes a ride and films a review of a Corvette, one of many vehicles he and his team features on their YouTube channel.

There are two reasons why he loves what he has been doing for the last 10 years: 1) he gets paid to drive new cars and tell stories through videos and 2) he gets to use his creative side to produce something that is meaningful to others.

His TFLcar (The Fast Lane Car) channel has accumulated 423,996,077 views since March 26, 2009. Its mission: “To provide the latest automotive news, views and reviews with unflinching honesty, transparency and credibility.”

Mica tries to think of everything that could possibly be important to a consumer when reviewing a car. While pushing the button to open the back door of a Kia Telluride, he counts. When someone is holding a baby or a bag of groceries, seconds become important. Knowing how strong engine torque is, how many cup holders and how many USB ports a vehicle has are all important to different potential buyers.

His team of 10 produces videos full time for five channels. They race sports cars around a track and test the latest four-wheel drives on tough roads in the mountains of Colorado. Displaying everything from how much storage space an SUV offers, to how quickly and easily rear seats go down in modern crossovers, they provide thorough, detailed reviews.

The Fast Lane Truck channel has 116 videos and over 288,000 views. The team gets the latest heavy duty trucks and compares them on a famous stretch of Interstate 70 highway, known as the Ike Gauntlet. This 8-mile section with a 7% grade starts in Dillon and goes east, up and through the Eisenhower-Johnson tunnels. At over 11,000 feet, these trucks are tested for their towing capacity by pulling a 16,000-pound horse trailer. A recent video pits the 2020 Chevy Silverado HD against the 2020 Ram Cummins on the “World’s Toughest Towing Test.” Since it was posted on June 29, 2019, this video alone has 1,193,648 views, with many comments from their viewers saying they wish they could afford one of these trucks.

Mica calculates that viewership with all five channels combined: TFLcar, TFLclassic, TFLtruck, TFLoffroad and TFL — they accumulate over 30 million views a month. People love educational and well-produced segments on subjects that interest them.

Coloradans from all over the state contribute to YouTube on numerous topics and have created many channels, such as Colorado Mountain Man Survival, AVA Rafting and Zipline, Colorado RedBeard Fishing, MoreJStu and the extremely popular LifewithMak, about teenager Makenna Kelly from Fort Collins. 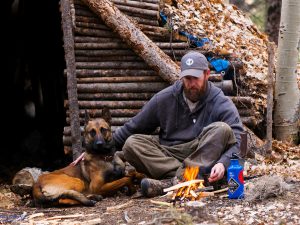 Colorado Mountain Man Survival provides you with all the survival training you could want or need on their YouTube channel.

And let’s not forget the Coloradans who also watch the millions of YouTube channels. A Durango resident, 28-year-old Jesse Shavel, watches inspirational content to educate himself on business and finance. He and his girlfriend watch live music and cooking shows together, but he is also an avid fan of UFC – the Ultimate Fighting Championships.

Another frequent viewer, Kathy Briggs, watches YouTube instead of television. After 9/11, the 61-year-old started watching conspiracy theory videos, which ended up on YouTube. Then, in anticipation of a trip to Mexico, she began watching travel videos. Kathy now enjoys watching travel accounts from places all over the world and can experience them from the comfort of her own home in Paonia. The owner of a health spa, she also watches educational videos on natural healing modalities.

YouTube has launched local versions in more than 100 countries and is available in 80 different languages. With billions of segments to choose from, no matter your interests, you’re sure to find something to watch while you are safe at home.