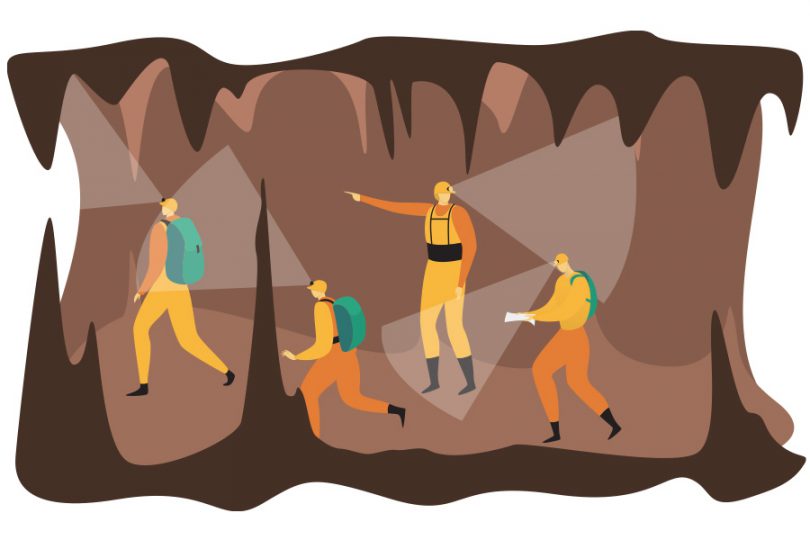 Natural wonders beneath our feet…

It wasn’t the first cave they discovered together and it probably won’t be the last. Colorado is rich in caves. No one knows exactly how many there are.

Some estimate there are 600, while others say it is far less. In 1970, 265 caves were listed in Colorado. But today, with continual discoveries by cavers, Rhinehart puts the number closer to 1,000. The day they were on the White River Plateau and found the open pit that led into a cave below the surface, Rhinehart and McFarland were exploring an area marked for development in the expansion of a limestone quarry near Glenwood Springs. The two men wanted to see if there were any significant caves in the area that might be at risk by such expansion.

Excited when they found the cave, the two brought in a group to help them explore further into the cavern. They squeezed through a low passageway into a crevice that descended deeper. Lowering themselves down the crevice, they found a lower chamber that seemed to go further back into the plateau.

Since this initial exploration of Witches’ Pantry Cave, the group has worked with the Bureau of Land Management on future access and exploration. Plans are in the works to send down a paleontologist to examine bones of animals that have fallen to their death from the pit entrance, many of which appear to be domestic sheep.

Rhinehart and McFarland also hope to use electrical resistivity to see if there are large voids around the cavern. The technique has been used throughout the West for identifying known and unknown cave passages and chambers.

It was another day in 1984 when they discovered Silent Splendor within the Cave of the Winds at Manitou Springs. The room held numerous rare crystalline speleothems, including helictites that appeared to defy the laws of gravity by growing in strange directions and not being forced down by gravity like many cave formations are.

Caves offer all kinds of natural wonders. Coloradans revel in the beauty of the Centennial state in all its various forms: the hues of the Rocky Mountains, the stark landscapes of the Western Slope and the endless grasslands of the eastern plains. Yet, most miss the natural wonders beneath our feet.

“Given that there are caves in limestone, gypsum, granite, sandstone, quartzite and even claystone, there are most likely more than a thousand caves within the state at this time,” Rhinehart claims.

Caves pepper Colorado with their wonders primarily due to limestone. Once where towering mountains are now, there was a sea, its floor becoming the source for the limestone. Uplift sent parts of the ancient seabed — and thus a large limestone layer — up along the slopes of the Rockies where snow and rain penetrated fissures in the limestone, sculpting caverns through the eons.

Some of these caverns transformed into underground cathedrals with massive spiral columns reaching from the floor to ceiling. Standing on the cave’s floor, a caver with flashlight in hand can see the wonders nature and erosion created.

Other caves are little more than cracks in rock with a stream of water snaking through narrow formations downward into the dark. Those who enjoy the sport of caving, also called spelunking, feel their way through tight passages with a mountain of rock above them and no quick and easy escape to the surface as they follow a water stream to wherever it takes them in the dark.

There are roadblocks in obtaining an exact count on the number of caves in the state.

“That information is unavailable due to natural resources’ sensitivities within and around the caves,” says Donna Nemeth, media spokesperson for the National Forest Service.

But with cavers such as Rhinehart and McFarland constantly making new discoveries, we are learning about more and more caves.

Discovered in 1968, Colorado’s longest cave, the Groaning Cave in White River National Forest, is a system of domes, underground cathedrals and tight passages that go back into the Rocky Mountains for 15 surveyed miles so far. It may be longer.

The Fixin’ To Die Cave near Glenwood Canyon is the state’s second longest at 4 miles. Colorado’s deepest cave is Spanish Cave near Westcliffe, which drops downward for 741 feet below the surface. Next in depth is Hurricane Cave in Garfield County at 553 feet.

But are the state’s caves and caving that strong an attraction?

“We essentially get inquiries about Colorado’s commercial caves like Cave of the Winds and Glenwood Caverns,” said Carly Holbrook of Handlebar Public Relations, which handles inquiries for Colorado Tourism. “I have never encountered anyone querying about caves and caving, though.

Mostly going unnoticed, an active group of caving enthusiasts has been exploring caves going back to the 1950s, if not longer. Members even have a publication, Rocky Mountain Caving, which first appeared in 1984. Today, Colorado has five clubs or grottos, a term used to describe a local chapter of cavers in an area.

Why would people squeeze and struggle through rock passages in the dark, literally under a mountain of rock?

It can be a dangerous sport. Cavers — and others who venture underground — can face flooded or partially flooded caves, cave ins and injuries such as a broken leg while deep in a crevasse.

For that reason, many cavers are trained to assist if an accident occurs underground or if a visitor is injured or turns up missing.

But as with any endeavor, the excitement and adventure of caving usually outweighs the dangers.

“Cavers basically venture underground for recreation and the sport of exploration of the unknown, but many have interests in various disciplines,” Rhinehart said. “This includes science, biology, microbiology, hydrology, mineralogy and geology.”

Rhinehart noted some cavers had spent years walking over limestone-rich sections of the state in search of caves without finding any. Other cavers work cave entrances that have collapsed or become plugged with sediment, trying to reopen them to gain entry.

Nearly all cavers have an interest in protecting and preserving the caves and cave features as well as enjoying a unique sport.

“In almost every instance, cavers generally do not report new discoveries to help protect the cave from abuse from others, either accidental or intentional,” Rhinehart said.

Cavers’ activities and word of mouth, however, have at least led to the public’s awareness of some of the state’s caves other than the three commercial caves: the Cave of the Winds, Glenwood Caverns (also known as the Fairy Caves) and the Yampah Vaper Cave.

The non-caving public has either visited or knows about the Ice Caves near Aspen; the narrow Fault Cave outside of Golden; the Fulford Cave outside of Eagle with its bats and 80-foot-high underground ceilings in some chambers; and the Spring Cave near Meeker, which has a subterranean river running through it and, like Fulford, serves as a winter hibernation chamber for bats.

Continuous lobbying by the cavers’ group and by the National Forest Service led to the Colorado Cave Protection Act signed in 2004 by Governor Bill Owens. The law makes it a misdemeanor to damage or deface a cave.

A White River National Forest ranger discovered someone had sprayed graffiti on the walls of Spring Cave, and both Glenwood Caverns and Cave of the Winds suffered from souvenir hunters and vandalism through the first half of the 20th century.

“History tells us that several chambers along the cave’s popular commercial route once were as well-decorated as Silent Splendor, but abuse by visitors since 1881 destroyed these beautiful places forever,” Rhinehart said of vandalism at Cave of the Winds prior to the passage of the 2004 law.

Vandalism is not the only concern that may cause limited access to caves or their closure to the public. Recently, biologists have been monitoring the spread of white-nose syndrome within Colorado’s bat population, which can prove deadly, and its spread by certain fungi. The fungi can be tracked into caves by way of cavers’ clothing and equipment. Finally, biologists simply want bats not to be disturbed during their winter hibernation.

Nemeth underscored that caves that are not closed year-round do have a registration system and decontamination guidelines which must be signed and followed by those entering the caverns. (whitenosesyndrome.org)

So, when thinking about exploring Colorado’s rich abundance of natural wonders, remember that the natural world extends beneath our feet into the caverns and crevasses of Colorado.

As a freelance writer, Mike Coppock writes a variety of articles for magazines and newspapers throughout the West.

Wonders Beneath Our Feet

Karst topography is a landscape that is characterized by numerous caves, sinkholes, fissures and underground streams. Karst topography usually forms in regions of plentiful rainfall where bedrock consists of carbonate-rich rock, such as limestone, gypsum or dolomite, that is easily dissolved. Surface streams are usually absent from karst topography.

(Click image to get a better view of Karst topography) 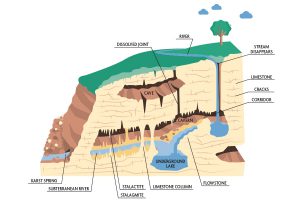