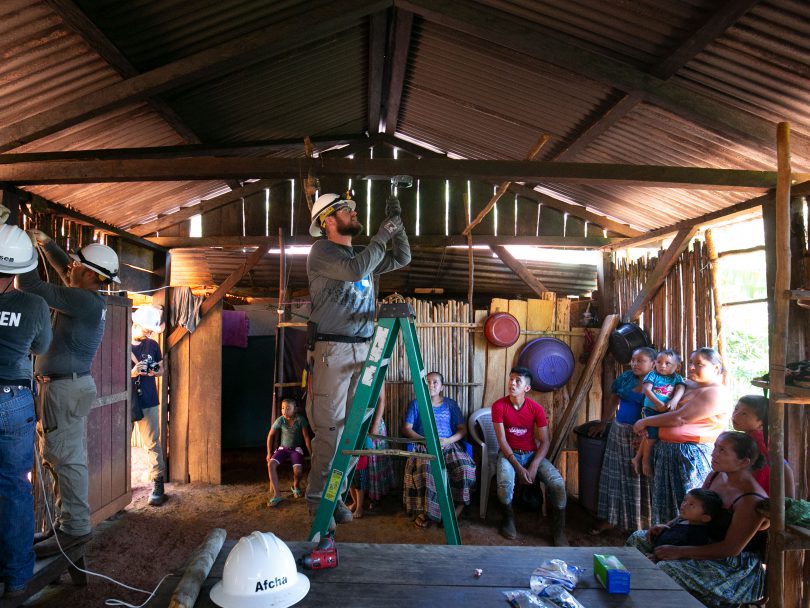 Volunteers wire one of the homes in Sillab, Guatemala, with sockets for lightbulbs. 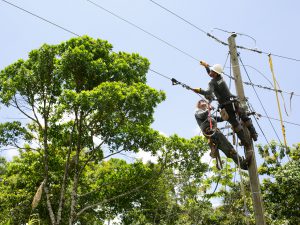 This past summer, 20 lineworkers from Colorado and Oklahoma went to Guatemala and changed the world for the people in the village of Sillab. By running power lines and wiring homes, they brought electricity and all of its possibilities to the people in this remote, rural village in Central America.

At the same time, the people of Sillab changed those who came to help them.

“What impacted me the most about the project was seeing how happy the villagers were with as few material things as they have,” said Jerid Bruna of Southeast Colorado Power Association in La Junta.

“I thought I knew what poor was,” said fellow Coloradan K.J. Johnson of San Miguel Power Association in Ridgway, “but I learned what real poor was.”

Some homes were built of nothing more than sticks bound together for walls with a thatched roof overhead and a dirt floor below. Others were built of rough planking crudely fit together to support rusted metal roofs. There was always a gap between the walls and the roof to ventilate the smoke from the cooking fire.

The fire would be going inside on a waist-high platform. Lower platforms or hammocks provided places for the family to sleep in what was usually a one-room home. Corn was piled in a corner to be shelled, ground and made into tortillas each day to feed the family. Wood and bananas were piled in other spots. There is no running water or plumbing.

While the villagers’ living conditions were a shock, Johnson also noticed that the people had real, true joy, especially the kids.

“The people were happy, grateful,” said Jason Matze of Mountain View Electric Association headquartered in Limon. They also seemed content, but excited with what electricity would mean for them and their village.

A PROJECT ON A MOUNTAINSIDE
The electrification project was a joint effort between Colorado’s and Oklahoma’s electric cooperatives with coordination by the National Rural Electric Cooperative Association’s philanthropic arm, NRECA International. Ten lineworkers from Colorado and 10 from Oklahoma spent two weeks electrifying 37 homes, a school and four churches. 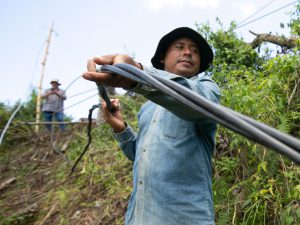 One of the villagers helps pull line up the hillside.

The team built 6.5-miles of line using 40-plus poles set to carry the wire through steep, hilly terrain and across deep valleys before zigzagging through the small community of homes. Each village family invested in the project by digging a hole and installing a power pole outside the home. The lineworkers then ran the wire from the pole to the home and wired the home with two lightswitches, two electric outlet boxes and sockets for lightbulbs.

The power lines now belong to a local utility, ADECORK (Association for Community Development Rax Kiche). ADECORK will generate and distribute electricity to Sillab from its 75-killowatt capacity hydropower plant. The utility provides electricity to 275 consumers in nearby villages scattered through this mountainous region of Alta Verapaz near the Belize border.

“The mountains were beautiful,” noted Ken Murray of Mountain View Electric, “but really steep.” The crew struggled climbing up and down the deep ravines. 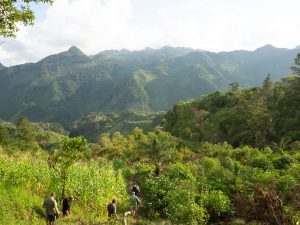 It was a project with challenges, noted Chris Stanworth of White River Electric Association in Meeker. “But the people made it 10 times easier.”

“The villagers were incredibly helpful,” said Austin Maier of Poudre Valley Rural Electric Association in Fort Collins. There was a mixture of kids, younger men and older men.

“We each had our little posse of people,” explained Kelly Snow of United Power, Inc. in Brighton. There were five or six villagers for each American volunteer. Using lots of hand gestures and eye contact, the lineman conveyed which tool he needed handed to him or what he needed moved or carried. The villagers participated in the project from the beginning, working together to set the poles for the line coming into the village in preparation for the project. This work had to be done by hand. Even the shovels they used to dig the holes were often handmade, carved from one of the hardwood trees that grew in the area.

The Americans noticed the teamwork and not just among the local villagers. “Almost every day men would come to Sillab from neighboring villages to help with the work we were doing, knowing that they were going back to an area that wasn’t receiving power,” Bruna noted.

But these villagers had hope. They knew NRECA International was working in the area. The nearby village of Chiis received electricity in another Oklahoma project two years ago. The whole village of Chiis lined the road and cheered for the convoy of co-op linemen as they drove through on their way to the worksite that first weekend. The people in Chiis understood what these Americans were bringing for the people of Sillab.

CELEBRATING LIGHT
Everyone celebrated Friday, September 6, when the lights did come on. 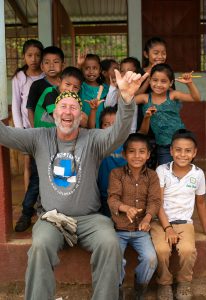 Lineman Rod Sherman
celebrates the lights
coming on with kids in
Sillab, Guatemala. Photo
by Studio 1441.

The villagers gathered at the local school to show their gratitude to the Colorado and Oklahoma volunteers. The leader of the village, who had prayed over the crew when the team first arrived, now offered a prayer of thanksgiving. He explained, through an interpreter, how appreciative the people of Sillab were for this gift of electricity.

Then his wife stepped forward. In tears, she said, “I don’t know if you understand what this means.” She went on to explain that she has always had to get up in the dark and, in the dark, take her family’s corn down the road to where it could be ground, then walk back in the dark and then make tortillas by candlelight. Now, she will no longer have to make her family’s breakfast in the dark.

“That was my favorite part of the trip: being able to turn on the lights and to see their faces,” said Jace Noe, a lineman from Southeast Colorado Power. 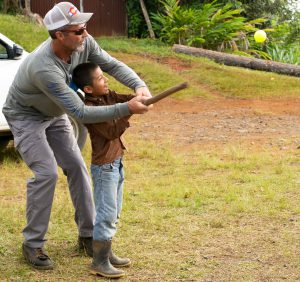 Kelly Snow of United Power, Inc., plays stickball with one of the village kids.

“If I have one God-given skill or natural ability, it is to climb wooden power poles, and for me to use this skill to change these people’s lives for generations means everything to me,” said Rod Sherman of Holy Cross Energy in Glenwood Springs.

“I smile knowing that we made a difference in Sillab with a service that many people in America take for granted,” Bruna said. Stanworth agreed: “It was great to drive away and know you did something that really helped them.”

The Colorado and Oklahoma linemen brought electricity and light to the village of Sillab. But the people of Sillab gave back so much more in the joy and friendship that they shared with their new friends from the north.

The people of Guatemala have had a piece of editor Mona Neeley’s heart since last year’s trip with the electric co-op international team to a different village in Guatemala.