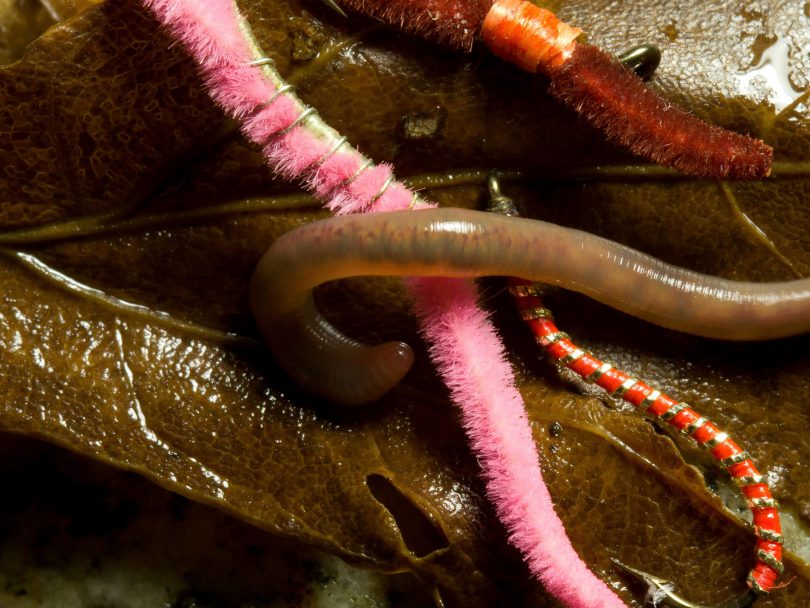 More than any other month, April triggers my sense of nostalgia — at least where trout fishing is concerned. Having been raised in the Catskills, I’m conditioned to think of April as the month fishing season officially opens, even if that’s not really the case here in Colorado.

Though I seldom fish with them anymore, worms are what I think of in April and the warm, rainy nights we spent doubled over in the backyard with kerosene lanterns and tin cans catching night crawlers. We could have used flashlights, but the soft, diffused glow of a lantern didn’t alarm crawlers like the intense, concentrated beam of a D-cell flashlight. Oddly enough, we valued the little night crawlers most, and saved the big, juicy ones for bass and catfish. Small crawlers and garden worms were reserved specifically for trout.

Using worms for trout today is seen as a bit primitive and actually forbidden on our “catch-and-release, flies-and-lures-only” trout streams, but in the ’50s and ’60s it was considered something of an acquired art and my father was an acknowledged master at it. The hot outfit of the day was a soft-action, 9-foot, fiberglass fly rod and an “automatic” fly reel spooled with heavy monofilament line, usually 20- or 30-pound test. A small bait hook was knotted to the terminal end of a 6-foot leader made of 4-pound test monofilament and weighted with strips of “wrap-around” lead ribbon as water conditions dictated. Lead strips were preferred to split shot because they could easily slide up and down the leader as needed. The entire rig was lobbed upstream and allowed to drift back down at the same speed as the current while the angler watched the line for any suspicious wiggles, bumps or taps that might signal a trout taking the bait. Today, of course, fly fishermen use fake worms made of chenille, wool, thread and wire, and call them aquatic annelid “flies” because it sounds more socially acceptable than “worms.”

Back in the day, my father used to tie a 1-inch patch of white cloth to his leader so he could trace every fickle movement of the line as he nursed the worm carefully through the currents. In effect, he was the first person I ever saw use what we commonly think of today as a strike indicator. More interesting, perhaps, is that the technique he used to dredge up the biggest fish in the river with his worms is the precisely same technique modern-day, high-tech fly fishermen refer to as “dead-drift, high sticking,” or “short-line nymphing.” That style of fly fishing was reportedly developed on our own South Platte River by some highly respected fly fishermen not so long ago. I often wonder if any of them recognized that they were really just bait fishing — but with a fly instead of a worm.