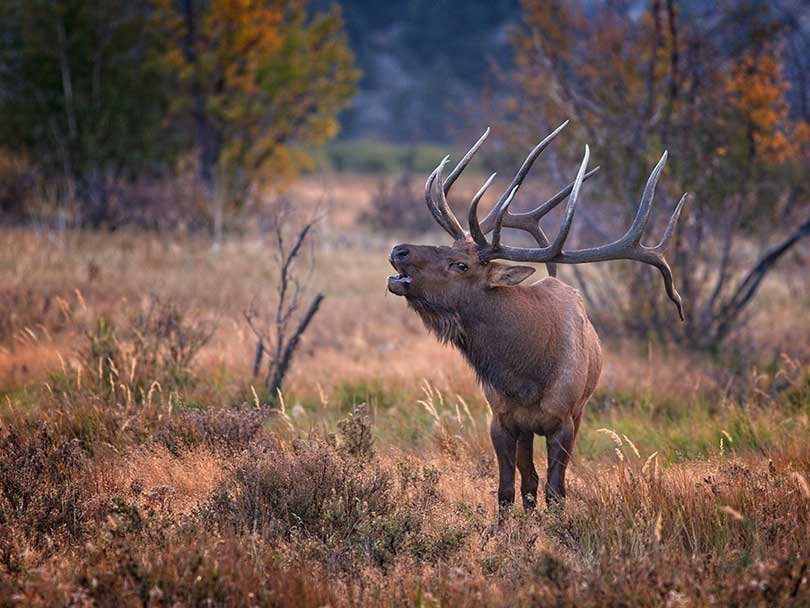 The dawn came up cold and gray from behind Rams Horn Mountain and brought with it a spitting mist of rain and little flakes of snow. It was mid-September, but it felt more like winter than autumn. Official sunrise was still 35 minutes away, but even in the gloomy morning light we could see clusters of elk scattered across the moraine.

My daughter-in-law Kristy and I had been parked in a gravel turnout on the Fern Lake Road in Rocky Mountain National Park listening to the wildlife serenade of whistles, grunts, mews, roars and bugling elk since 5:15 a.m. We had come to photograph the elk rut and it looked like we were gonna have a good day.

I started doing a lot of my “elk hunting” with a camera instead of a bow or rifle several years ago, not because I lost my love for the hunt — or the meat (I haven’t) — but because I never tire of watching wildlife, and photographing elk gave me another excuse to be out there among the wild creatures.

It soon became clear that with a camera you could hunt more often and in more places without the fees, time restraints and other regulatory restrictions imposed by a seasonal big-game hunting license, assuming you were even able to draw one in the first place — just because you apply for an elk tag is no guarantee you’ll be awarded one.

I’ve also come to appreciate that you can shoot as many big bulls as you can find with a camera, and that it’s far easier to haul a 700-pound bull elk out of the woods on a memory card than it is to pack one out on your back.

Having said that, I confess to doing a lot of my elk hunting in Rocky Mountain National Park where, at the peak of the rut, it’s possible to see as many as a dozen big bulls and scores of cows, yearlings and calves a day, not to mention mule deer bucks, the occasional bull moose, a herd of bighorn sheep, a whole guidebook full of ground squirrels, pikas, marmots, magpies, hawks and God-knows how many different kinds of songbirds.

I love being in elk country any time of year, but even more so in autumn when the aspen groves, alpine meadows, willows and creek bottoms are blazing with fall color. Having grazed on lush mountain grasses all summer long, the big-game herds are fat, sleek and healthy. They’re as handsome now as they’ll ever be and can make for some really nice photos, but being able to share them with family and friends is the ultimate reward.