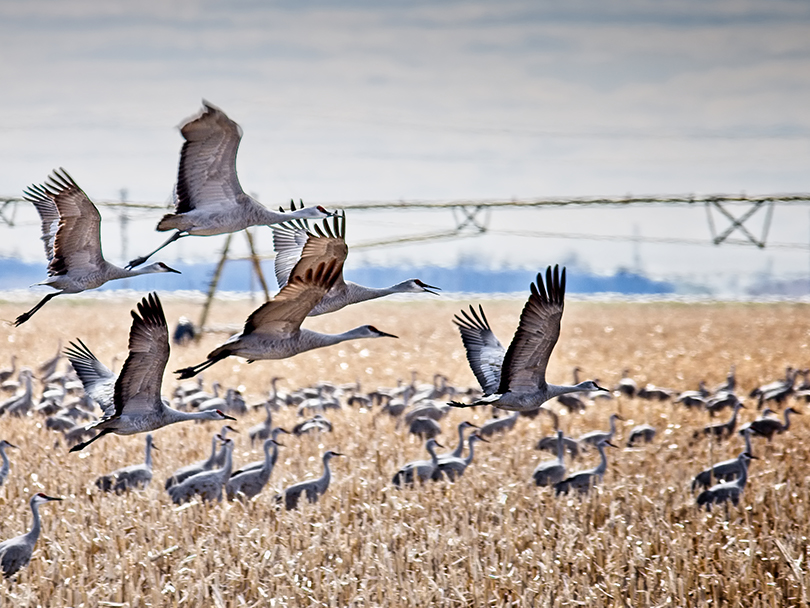 We were traveling east on state highway 30 headed for Kearney, Nebraska, to witness the annual spring sandhill crane migration when a wicked snowstorm blew in and it became clear we’d have to get off the road soon or risk a long, cold night marooned somewhere along the Platte River bottomlands. We were towing a 30-foot RV, and the thick, wet snow combined with high winds made driving increasingly dangerous by the minute.

Things were looking pretty grim when the driver’s side windshield wiper blew off near Paxton. A cellphone search showed there was a Walmart store in the next big town and we hoped we could take refuge in its parking lot for the night. But that was still about 35 miles distant, the snow was already several inches deep and piling up fast, and there wasn’t a snowplow anywhere in sight. We pulled off the side of the road as far as we dared and got out of the truck to see if we could replace the missing wiper with the passenger-side blade. It worked. We got back in the cab and white-knuckled our way to the Walmart parking lot in North Platte where we made camp for the night along with a dozen or so over-the-road truckers and several more campers trapped by the storm. Our adventure was off to a good start.

The spring migration of sandhill cranes is an utterly fascinating, one-of-a-kind wildlife event that ranks right up there with the great migrations of African wildebeests and plains game. Every year from late February into early April, massive flocks of sandhills from all over the world descend on the Platte River Valley in central Nebraska to rest, refuel and begin courting rituals before continuing the trip to their northern breeding grounds in the United States, Canada and as far away as Siberia. Scientists tell us it’s been going on for millions of years. Several species of ducks, geese, whooping cranes and shorebirds migrate with them, driving the combined bird count to over 650,000. The birds feed on spilled grain waste in the fields by day and roost on the river’s vast network of sandbars during the night to evade predation by foxes, bobcats and coyotes.

Triggered by some internal device, they rise en masse from the river as sunup nears, and the roar of wings and high-pitched squawking of hundreds of thousands of cranes taking to the air simultaneously is almost deafening. Guided tours are available, but there are plenty of roadside pullouts and viewing stations along the river corridor for do-it-yourselfers. If you haven’t already done this, you need to put it on your bucket list. If you have done it, there’s a good chance you’ll do it again. Read for yourself: visitKearney.org/sandhill-cranes.