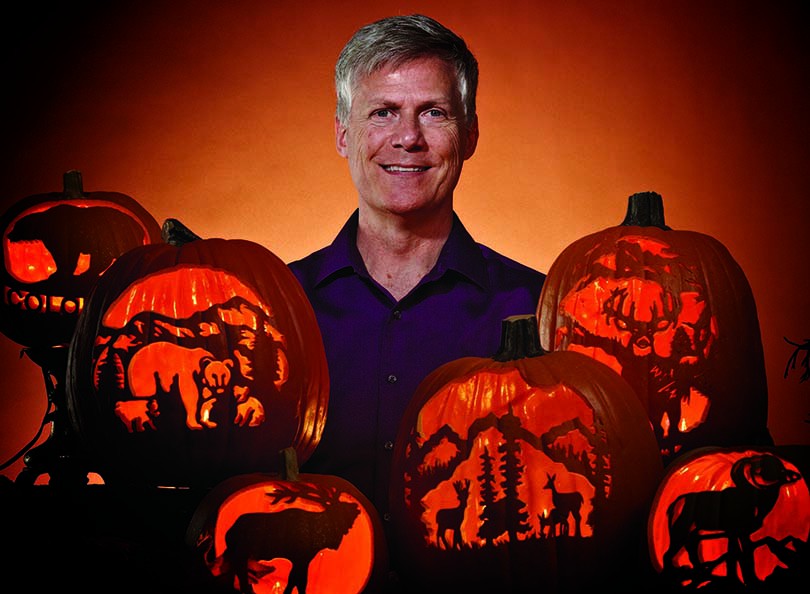 Barry Brown, master pumpkin carver, hangs out with some of his favorite jack-o’-lanterns.

Barry Brown’s eyes twinkle with the mere mention of pumpkins. It’s no wonder: His pumpkin carving dates back to his early childhood when he recalls not being satisfied with a triangle-eyed jack-o’-lantern, so he pulled out a paring knife to give the gourd some pizazz.

Fast-forward to 2015 and there’s no doubt the master pumpkin carver can tell you all you need to know about pumpkins. Our pumpkin powwow shifted in several directions, from pumpkin shenanigans growing up in Erie, to his career with the Bardeen family (the creators of the first-ever pumpkin carving kit), to his dream of one day creating a unique family experience with a display of 5,000 carved pumpkins. “It’s funny to be a pumpkin geek,” Brown says.

Throughout his pumpkin-carving career, Brown bedecked stages, film sets and museums with his elaborate creations, including the films “Hocus Pocus” and “The Santa Clause,” as well as the 9News set. He carved for weddings and exhibits, and etched out numerous company logos, including Colorado Country Life’s. The more elaborate the design, the longer it takes.

“There are very few people that I would say are as good as I am, and he’s probably better,” says John Bardeen, who heads the family business Grampa Bardeen’s Family Pumpkin Carving Set along with his four sisters and two daughters.

But what really moves Brown is how carving pumpkins creates family traditions. “It’s this craft that has a moment of pride,” Brown explains. “Once the lights come on, all the mistakes go away. What you see is this great image that comes out.” More than that, parents and children enjoy a special moment that makes them want to carve together year after year. 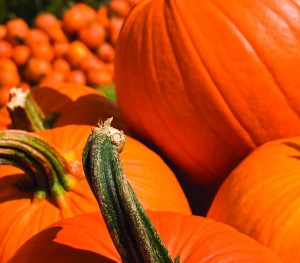 Step 1: Picking a pumpkin
Fresh is better. The pumpkins you find at grocery stores often become stringy on the inside because they sit around, Brown says. This time of year, pumpkin farms advertise their “pick a pumpkin” events. Take advantage of these festive events and pluck your perfect pumpkin straight from the vine.

Pumpkins that are lighter in color are juicier and easier to carve. Darker pie pumpkins are not good for carving.

Find a pumpkin that has a bit of a flat side. This is a beneficial trait that will make transferring an image easier. 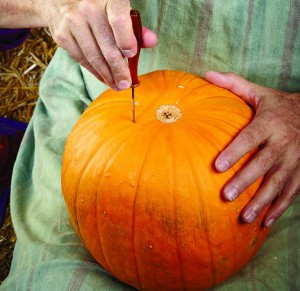 Step 2: Creating the hole
The key to the entire pumpkin-carving process is holding the saw like a pencil. “I see people using it like a steak knife,” Brown says. “Don’t use your strength. Use the up-and-down motion.” Think of a lumberjack cutting down a tree with a saw. The saw does the cutting. The lumberjack operates the saw with motion, not strength.

The majority of people carve out the top of the pumpkin to get inside, but Brown prefers cutting out the bottom, keeping the top intact and pretty. Eye the bottom of your pumpkin and find a “ridge of light” where you can see a circle. This is where you carve the opening. Cutting straight up and down, like a sewing machine or jigsaw, create a hole that’s just big enough to fit your hand in. Don’t go too big.

Brown suggests making a straight cut in the circle cutout to create a handle, otherwise you’ll find yourself thumbing out the cutout or lose it inside the pumpkin. Avoid the blossom scar though. It’s really difficult to carve through. 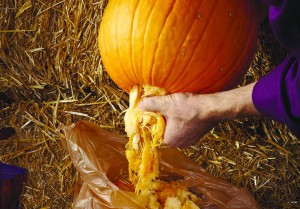 Step 3: Scooping out the “stuff”
Brown says the best way to scoop a pumpkin is to use a Grampa Bardeen scraper scooper. A store-bought scooper will get the job done, but it will take more time. You will extract more of the stringy stuff with the scraper scooper. “It’s so much less messy and it just dumps out all at the same time,” Brown explains and dumps out the innards in one fell swoop. The inside of the pumpkin is pristine.

“The way that others make that scoop now, they have to take a lot of plastic out of it, the handle is super short, the scoop is little. It’s great to transfer and it’s great to ship from China, but once you get it into your hand and into a pumpkin, the patented cutting edge isn’t there.”

Grampa Bardeen’s scraper scooper is made in the USA and works right, Brown says. “It makes me feel good and I can say to the people that I’m carving with and who pay me to come as the master pumpkin carver to teach them how to carve pumpkins, this tool works.”

Step 4: Transferring the pattern
To create your pattern, you can wing it or use an image as a type of dot-to-dot guide. Far too often parents are left carving the pumpkin because the process is just too difficult for the child. This is why it’s so important to use the tools correctly and to thin the pumpkin shell from the inside at the design site with a scraper scooper.

“What I love to do is teach a parent how to teach a kid how to carve,” Brown says. “A little hand can saw through a half an inch of pumpkin as opposed to an inch and a half of a pumpkin. A kid can be successful and feel like, ‘I did that,’ as opposed to, ‘I can’t do that. I’m going to go play video games and my dad’s going to finish the carving.’”

Place your image where it works best, usually the flattest area of the pumpkin. Look for where the paper bubbles and then pinch and fold the bubbles flat, avoiding the pattern lines, and tape the folds down.

Use your pounce wheel — the tool with the handle and toothed wheel — and follow the pattern’s outline. When you can’t get around the curves, use your poker instead.

The dark part of the image on the pattern is what you will carve away and the light part stays behind. “But when you take the pattern off, it’s all orange, so you want to keep your pattern,” Brown suggests. To save his pattern, the master carver gently uses his saw to undo the tape. “When it’s transferred, sometimes it’s a little hard to see, so one of the magic things is to take some (moist) flour and rub it into the holes,” Brown says. This process lights up the holes so you can see more clearly where you need to carve. 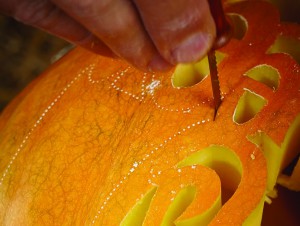 Step 5: Carving the pumpkin
Brown carves his pumpkins in his lap because he can control how it moves. He suggests carving at the top, or the “North Pole,” in a straight up-and-down motion. “The blade is pretty strong straight up and down, but it’s bendy. So you can’t treat it like this,” he says, making a stabbing motion.

As you carve, turn the pumpkin in your lap so that you consistently work from the “North Pole” and the blade is always moving straight up and down. Think of how a sewing machine functions. You are the sewing machine.

As a master pumpkin carver, Brown can push large pieces out of the pumpkin as he goes. For the novice carver, however, he suggests cutting smaller pieces and gently removing them. Wiggle them from the inside and outside to figure out which way works best. 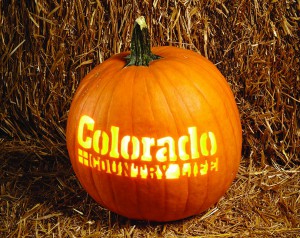 Step 6: Lighting it up
Often a carved pumpkin doesn’t look as amazing as predicted. But that’s before the light comes on.

“We’re making cracks. We’re making openings in this beautiful, round, bountiful thing and now we’re putting a light in it,” Brown says. “When the light isn’t in it, you can’t really tell what’s going on — it’s like negative space — but when the light comes on you see this image.” And more times than not, that image is pretty extraordinary.

If the hole was carved on the bottom of your pumpkin, use a battery-powered, LED or plug-in light to illuminate it. Without the ventilation up top, the heat and smoke from the candle won’t have a “chimney” to escape from. 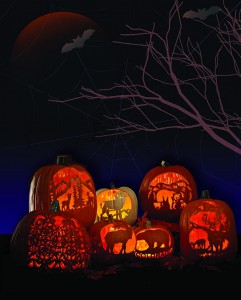 Step 7: Enjoying your achievement
Don’t let your hard work go to waste; your pumpkin should be enjoyed to its fullest potential. “What would you do with a portrait of your mother? Leave it on the porch? At night?” Brown asks. “Light it as long as you enjoy it. Put it where you can see it. If you’re watching television, put it by the television.”

But how do you keep it fresh? Brown compares a carved pumpkin to a sandwich. “You want to keep the moisture in and the air out,” he says. “If you put it in the refrigerator, it slows down that (deterioration) process.” Wrap your pumpkin in plastic wrap first and then refrigerate.

But showing off your pumpkin outdoors on Halloween night is part of the fun, right? Go ahead and display your pumpkins with pride, but cater to their needs. Brown says pumpkins don’t like concrete, so place them on plates. But be sure to bring them inside before bedtime. No one can enjoy your pumpkins while you’re sleeping, except for the Halloween hoodlums who want to smash them in the street.

Amy Higgins is a freelance writer from Centennial. She is enchanted by Halloween and looks forward to starting a new tradition of carving pumpkins with her son Jack using their own set of Bardeen carving tools. Have a local story idea? Email her at ahiggins@coloradocountrylife.org.