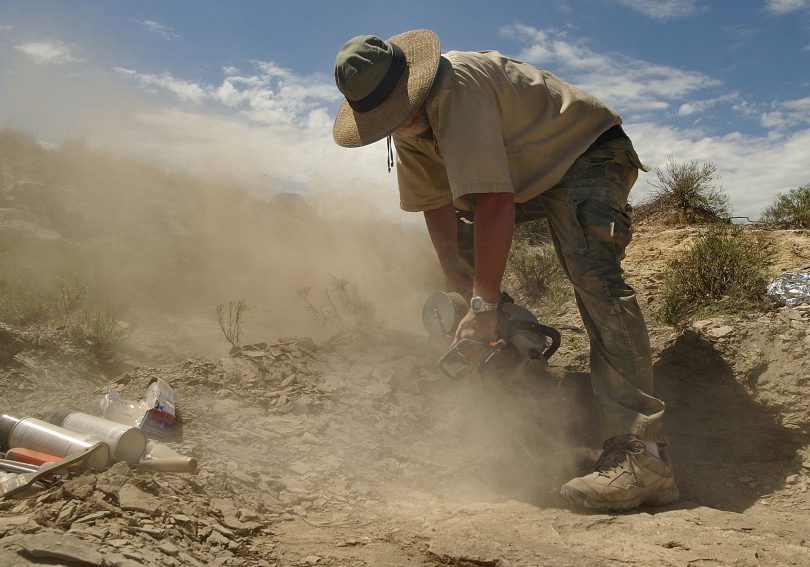 Mike Triebold searches for fossils on a dig.

West of Colorado Springs, nestled among vacation destinations along Highway 24, is an unexpected discovery: a dinosaur wonderland. 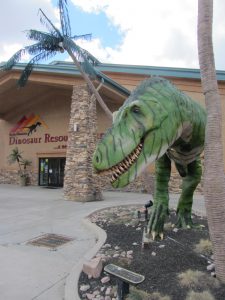 A Daspletosaurus welcomes guests to the Dinosaur Resource Center.

Colorful, life-sized dinosaur statues welcome visitors to the Rocky Mountain Dinosaur Resource Center, a low brick building in downtown Woodland Park. Even with the Daspletosaurus and the Styracosaurus beckoning dinosaur fans off the main road, these two prehistoric animals are only a hint of the treasure trove of dinosaurs and sea creatures that inhabit this unlikely museum.

Finding Fossils
Triebold Paleontology, Inc., was founded by Mike Triebold in 1989. TPI specializes in unearthing, restoring, replicating and selling fossils, which now appear in museums all over the globe. Mike’s team of talented paleontologists unearth those fossils at ranches throughout the Midwest.

Paleontologists Triebold, Anthony Maltese and Jacob Jett scout areas around these ranches and uncover fossils of all shapes and sizes.

“We know what kind of animals lived in the outcrops that are on (these) ranches,” Triebold explains. “So, I will go to a rancher and explain what I want to do and how it works. We discuss what we will be doing, how we do it, how they benefit. All my ranchers receive a royalty. If they’re interested and they want us to do it, then we sign the license and go to work.”

Often, they can guesstimate promising areas that may reveal fossils based on rainfall activity and erosion.

“If you’re in a drought, not much happens. If you got normal rainfall, it’s predictable. If you have really heavy rainfall, things can change dramatically from one year to the next,” Triebold explains. The heavier the rainfall, the more erosion will take place, revealing fossils unseen in 65 million years or more.

“We usually only spend a short amount of time at each ranch each summer and walk through the outcrops,” Triebold says. “It’s not a matter of if we find something, it’s a matter of when because we know we’re going to find things.”

In 2006, the team discovered a Daspletosaurus, a type of tyrannosaur smaller in stature than the T-rex and with longer arms. More than 80 percent of the dinosaur was recovered from that dig, which is extraordinary in the paleontological world.

“Usually skeletons are not complete; sometimes individual bones are missing little pieces,” Jett says. “So, we have to restore them, because if we mold and cast them into a skeleton and they’re missing a chunk, it’s really obvious to even your casual observer. The average 5-year-old can tell that something’s up.”

The TPI crew worked intently to create a cast of the Daspletosaurus, which they nicknamed Pete. (The TPI staff found it is easier to nickname fossils than to continue to call them by their scientific name or a catalog number.) The cast of Pete will be finished in the coming weeks and will then find its home at the Royal Gorge Dinosaur Experience in Cañon City. (Read about this new dinosaur museum in the Discoveries section on page 30). But as the crew works, it becomes clear that Pete’s identity is more of an anomaly than the team originally thought.

“As we’ve been working in the lab, we’re finding it’s more unusual than we first thought. [Daspletosaurs are] not well-known. This was number eight or nine that has ever been found, as opposed to the T-rex, which there are more than 50 out there,” Jett says. “And as we’re getting into this one, there’s going to be a lot of science done on this particular specimen. I wouldn’t be surprised if we got a new species out of it.”

Maltese adds, “It happens all the time, though, with stuff we’ve dug up. We just described two or three new species of fish about a month ago.”

“Described” is a scientific explanation of a specimen used among scientists. Describing a species is important in this line of work because it is used as a type of reference tool for future finds.

“If somebody else finds another skeleton or animal with those features on its skull, those will be classified as that species because they’ll refer back to the first one that was found,” Maltese says. 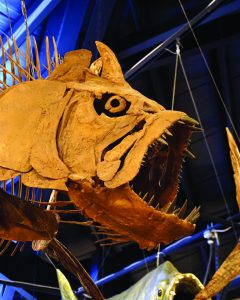 A full Xiphactinus audax hangs from the museum ceiling.

Jett adds, “It’s also how you know if it’s something different as well. If somebody else comes along and finds another fish head and it differs in substantial ways, they know that it’s not the same thing.”

TPI finds fossils in North Dakota, South Dakota, Montana and Kansas. TPI has explored some of the ranches for nearly 30 years. Why not Colorado? “It’s not because I don’t want to,” Triebold says. “Basically what’s happened is, they keep us really busy. But, if a rancher from Colorado wanted us to scout their land for them for fossils, I’d be happy to do that.”

An All-Star Casting Crew
Pete is just one of the projects under way in the TPI lab, just beyond the viewing windows in the museum. At one end of the building in the paleo lab, Catrina Callahan and April Patton work meticulously on a Hell Creek Pterosaur, a pint-sized dinosaur with a wingspan of approximately 4.2 feet that was discovered in 2010. 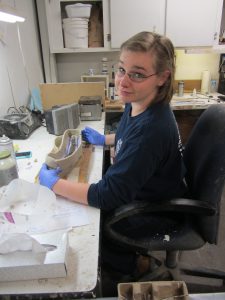 Catrina Callahan “flips the mold” of a Pterosaur.

Callahan and Patton mold the Pterosaur to the company’s high standards, using metal to keep the parts in shape. Bedecked in her powder blue gloves, Callahan carefully “flips the mold” of the Pterosaur to finish the already completed side.

Amid their work on the Pterosaur, the two are also meeting a deadline to finish pieces for Pete. Molds of the fossils were created soon after the removal of the Daspletosaurus from the site, but since October 2015 the crew has concentrated on completing the rest of the dinosaur.

“It’s fun working here,” Patton says. “You get lots of gratification from this job.” 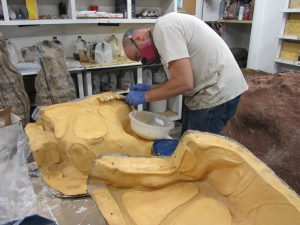 Moving down the hallway to the casting lab, Caleb Lewis is busy making repairs on a latex mold of a Brachiosaurus.

“Remember the first ‘Jurassic Park’ movie where there’s a huge dinosaur there and Sam Neill falls down crying? That’s what this is,” Lewis says. “Kind of makes Apatosaurus look like a pipsqueak.” 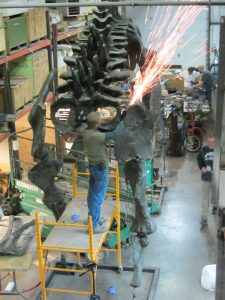 Looking back at his work, he notes, “This is a latex mold and sometimes they’ll get tears and you have to repair it. I’m just trying to stuff latex in there and make it OK again.”

TPI uses a laser scanner, mirror imaging and 3-D printing to recreate the missing features of its dinosaurs. TPI also uses scanning and prototyping to create 1/18th-scale copies of full-size dinosaurs to sell in the museum’s gift shop.

As you approach the assembly area, sparks fly as David Livingston welds segments of a Brontosaurus. Maltese and Jett work on Pete’s metatarsal as it dangles from the ceiling. Several other men on the crew are loading a big order onto a big rig. And at the north wall of the lab, a silver-haired gentleman peeks through a public viewing window from inside the museum.

For Your Viewing Pleasure
Visitors on the museum side of the facility are greeted by prehistoric fish suspended from the rafters and on floor displays. A massive fossilized Xiphactinus fish, nicknamed Mildred, covers virtually the entire wall where it is displayed. 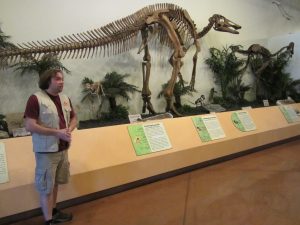 Stephen Woolf leads a group of curious fossil fans through the museum’s exhibits.

“I’m actually one of the people who helped dig this up,” says Stephen Woolf, a visitor experience guide. “Mildred is a record holder. Normally they’re 9 to 11 feet, maybe 13 feet. Mildred is the record holder at 18 and a half feet.”

Woolf’s knowledge of the surrounding fossils is vast and his animated gestures and facial expressions along with the inflection of his voice are captivating. He spiritedly explains how scientists believe what was once Pangea, a supercontinent, split and formed new land masses and what the climates were like.

“It was very, very much like a rain forest in lots of parts of the world with some really, really big herbivores. Long necks in general thrived very much at this time,” Woolf explains, adding, “This is a time period Colorado is really famous for. We have something called the Morrison Formation. It’s a Jurassic layer that’s thick with these animals.”

It takes about an hour for a guided tour through the museum. Consisting mostly of three rooms, the museum is small in size, but the fossil collection is immense.

An average size Conchoraptor gracillis is on display in the museum.

“We’re, at the moment, the largest dinosaur museum in the entire state, but we’re still not as big [in area] as those museums,” Woolf says. “We actually have close to the same amount of skeletons on display as the Smithsonian does.”

While every skeleton on display is fascinating, there are a few that have particularly interesting stories. For example, a Pachycephalosaurus, which the museum proudly displays, is a prized discovery by Triebold. Triebold is currently the only person to discover both the skull and body of this species.

Also, in 2012, TPI discovered a new species of Ceratopsian when crews assembled a new find. “Originally we thought it was something called an Avaceratops until it was put together. [Then] we thought, that’s not an Avaceratops at all,” Woolf says. Part of a group called Centrosaurines, this fossil, nicknamed Ava, has some peculiar features that are uncharacteristic of this group.

“Usually Centrosaurines are all nose and very little brow horns to speak of. She’s the opposite. Not only that, they’re curving in,” Woolf says.

A Passionate Profession
Regardless of who you talk to at the museum or TPI, there seems to be a common theme: job satisfaction. Not everyone who dreams of working with dinosaurs actually sees it come to fruition. 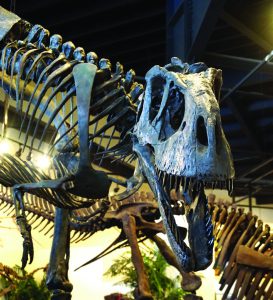 An Albertosaurus sarcophagus is part of the main room’s display.

Jett and Maltese are so passionate about their jobs that they decided to share interesting and fun aspects with the world on a YouTube channel called “Dinosaur Nerds.” The compilation of videos featured on their page shares information on how to collect data on a dinosaur dig, how TPI uses 3-D printing, what makes Ava the Ceratopsian so special and more. Check it out at dinosaurnerds.com.

“I’m very fortunate because a lot of my friends in the sciences work in nut factories. Literally a nut factory, and [that friend] has his doctorate in chemistry, so I’m very fortunate to work in something I care about,” Woolf says. “I get to talk about dinosaurs all day.”

What’s not to love? Working with artifacts of magnificent creatures that lived eons ago is a gig you can dig.

Amy Higgins is a freelance writer from Centennial. With a fifth-grade son, dinosaurs are an intriguing subject in her household. They plan to visit several dinosaur museums in Colorado this summer.

Want more behind-the-scenes footage from the Rocky Mountain Dinosaur Resource Center? Click here for a video of an assortment of great pics!