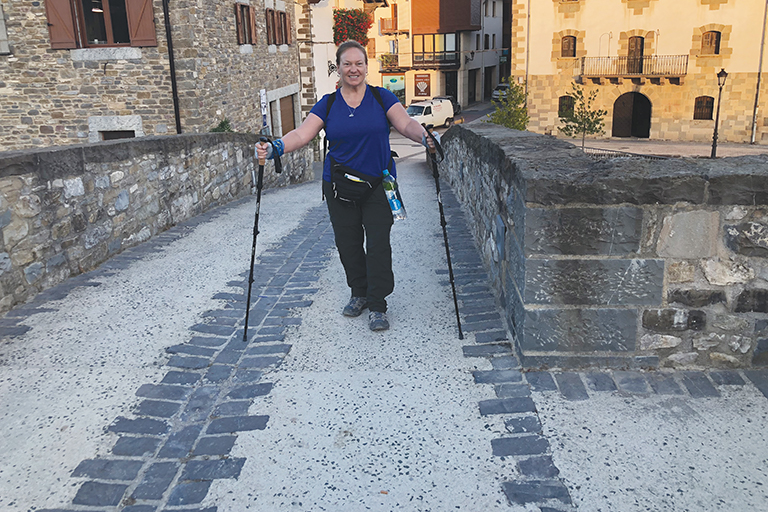 Zdunich on the cobblestone trail.

“I wanted to do something spectacular for my 60th birthday,” Angie Zdunich says. So she did.

On August 30 of last year, the western Colorado woman began a 500-mile trek across Spain along the Camino de Santiago (Way of St. James). It took her 39 days.

For thousands of years pilgrims have made the Camino journey to pay tribute to the biblical apostle St. James, whose tomb lies in the Cathedral of Santiago de Compostela in Galicia, in northwestern Spain. “They say ‘the Camino is calling,’ that it’s a cleansing, spiritual journey,” says Zdunich, who lives on the Western Slope. “You can walk for any reason — old baggage on the soul that you want to purge, or if you want a religious experience. Some just want a good hike.”

Zdunich, a devout Catholic, was looking for both adventure and healing after her son Jason was diagnosed three years ago with stage three colorectal cancer at age 37. “So, I added that to my Camino purpose,” she says. “I needed some divine intervention. I was praying for a miracle.” Zdunich attended daily “pilgrim masses” led in Spanish in churches and cathedrals along the way. In every church she lit a candle for her son.

Zdunich chuckles when people marvel at her courage for going alone. For nearly a quarter century she worked as a police officer in San Diego where her three sons are now policemen. Zdunich’s law enforcement career also included two years serving as an international police officer in Kosovo.

In 2014, she retired from the police department and the following year moved to Glade Park, a rural community 16 miles west of Grand Junction where she lives with her elderly mother 3 miles up a dirt road on 35 acres of piñon-juniper forest. Zdunich trained for the trip by hiking the trails in the nearby Colorado National Monument, as well as walking on the gravel, hilly road outside her home, elevation 7,500 feet.

After arriving in Paris August 29, Zdunich caught a flight to southwestern France. A one-hour shuttle brought her to Saint Jean Pied-de-Port, the official starting point of Zdunich’s chosen route — the Camino Francés. There, officials at the pilgrim’s office stamped her “credential” (a pilgrim passport) with the first of many stamps collected along the way. (These are required to receive a certificate accrediting the journey.) Pilgrimages must be completed either on foot, bicycle or horseback.

The following morning Zdunich walked the cobblestoned streets of Saint Jean-Pied-de-Port until she reached the outskirts of town. There she began the rocky, uphill climb toward the misty Pyrenees Mountains, where, at the summit, the trail crosses into Spain. 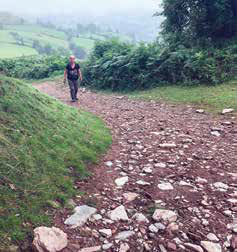 The Camino terrain varied along the way.

On the road
The Camino de Santiago winds through towns and villages; parallels pastures of grazing sheep, horses and cattle; becomes a dirt trail through forests or a paved sidewalk next to vineyards. Pilgrims walk by fields of sunflowers, an occasional castle and statues of the Virgin Mary tucked away here and there. “It’s so intimate, so personal, walking through a country on foot,” Zdunich says. “You really do get to stop and smell the roses.”

Zdunich foraged on wild blackberries that crowded the trail in some areas. There were also ripe apples and figs free to passing pilgrims. Yellow arrows painted on sides of buildings, fences or gates mark the way so pilgrims don’t wander in the wrong direction. Additionally, iconic scallop shell shapes mark the way. The scallop shell is an ancient symbol representing the various Camino routes that one can take, all leading to Santiago de Compostela. 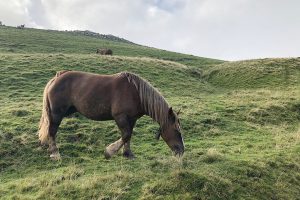 Locals and pilgrims alike call out to one another, “Buen Camino!” — the traditional greeting heard everywhere. Church bells chiming throughout the day intermingle with the ever-present sounds of bells worn by farm animals to create a sort of music in the background, says Zdunich. “As we passed farms and villages, all livestock wore bells — horses, cows, sheep, goats — so people can keep track of their animals.”

Though Zdunich planned to walk the Camino solo, she was seldom alone. That was also true for Juanita Solis, a 69-year-old fellow pilgrim originally from Austin, Texas, who accompanied Zdunich for about a week. “On the Camino, you tend to meet up with other pilgrims for a while, and then you go your separate ways” as you walk at your own pace and schedule, explains Solis, who currently resides in Bayonne, France. “Angie and I had an instant connection — that happens a lot on the Camino. I never felt alone. There’s always someone around — either in front, behind or beside you. I never felt afraid or threatened.”

Zdunich also hiked with a woman from Canada and a woman from Scotland, as well as a man from Italy. Two sisters from Washington state became her companions for several days. Zdunich met an elderly Italian couple who held hands as they walked, who told her they return to Spain for two weeks each year to walk the Camino through Spain’s picturesque vineyard country.

A Spaniard she met completed the Camino on 29 occasions; and there was a man from North Carolina who repeated the Camino 11 times. A German named Heiner told Zdunich he lives on the Camino full time. He walks from France through Spain to Santiago de Compostela, and on to Portugal where he spends the winter, living on 20 euros a day. Zdunich also met pilgrims from Ireland, Korea, Japan and Martinique. She saw children with their parents, and people in their 90s walking the Camino.

What to bring, where to stay
Wearing a backpack for 30-plus days is a feat that requires careful planning. Zdunich brought one change of clothing, a down sleeping blanket, a small hand towel and shampoo that worked for cleaning her hair, body and clothes. She also carried rain gear, a digital guidebook, a lightweight down jacket and foot care supplies. 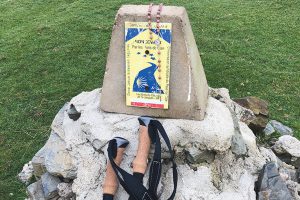 Pilgrims seldom carry food, choosing instead to eat at the cafés in towns and villages along the way. Walking sticks are essential, as well as earplugs, for sleeping soundly in an albergue (hostel) full of people. “You might be sound asleep and then you hear a cell phone alarm, or a zipper” as someone inevitably prepared to leave before sunup to get an early start, Zdunich says. Eye masks also come in handy to block the glare of people’s headlamps in the early morning darkness.

One thing backpackers don’t have to carry are tents — albergues cater to pilgrims and are located all along the way, costing roughly $17 per night. Booking a room in an ancient stone monastery is also an option, which Zdunich did for three chilly, albeit quiet, nights. Pilgrims can also stay at hotels in town.

Zdunich typically arrived to the albergue — which she booked in advance — by afternoon, where she immediately removed her boots and slipped on flip-flops (another essential item) to allow her feet to breathe. Then she would change into clean clothes, and wash by hand the shirt and hiking pants worn that day to hang on the clothesline to dry by the next morning. Then it’s time to tour the town (more walking), and find a bar (cafés are called bars, though its true pilgrims’ meals automatically come with a glass of wine).

Breakfast in Spain was typically café con leche and a pastry, or a slice of a baked egg and potato dish that Spaniards call “tortilla.” Lunch might consist of a baguette sandwich with a thin slice of ham and cheese. Dinner included either pork, chicken or fish with a salad and bread, water, dessert and glass of wine.

Wine for the Camino hills
Toward the end of her journey, while dealing with painful shin splints, Zdunich met an especially exuberant man from Madrid named Arbaro who was walking the Camino carrying a bota bag of red wine.

“Red wine is your gasoline for uphill, and water is for the downhill,” he told Zdunich. He explained how drinking wine along the Camino is an ancient tradition dating back to when fresh, clean water was scarce and pilgrims drank wine to stay fueled and hydrated. He lightly touched her back with his index finger to “push” her uphill, asking if it made the climb easier, which, somehow, she says, it did. “It’s all mental — you control getting up this hill with your mind,” Arbaro told her.

“He was just a delightfully wonderful companion,” she recalls. That afternoon, after they reached the albergue where Zdunich had booked a bunk for that night, she and the Spaniard shared a tall, cold, local Galacian beer before he continued on to the next town. She never saw him again but received an email message back home in Colorado, wishing her a “happy new year,” which, she says, makes her smile, remembering the man who made her laugh as she labored uphill sipping red wine.

On the morning of day 30, a chance encounter with a man from Croatia proved especially meaningful to Zdunich, whose grandparents emigrated to the United States from Croatia. She had traveled to Croatia on multiple occasions to visit family members who continue to live there. 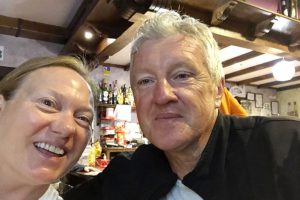 On day 30, Zdunich meets a man from Croatian who turned out to be her ‘Camino angel.’

“It was great to hear the Croatian language again, as my grandmother lived with us and she always spoke Croatian,” Zdunich recalls. They shared a café table and stories of Croatia before heading out separately for their day’s walk. As he was leaving, the man turned around to give Zdunich a Croatian patch, saying he didn’t know until meeting her why he had felt compelled to bring it along. Zdunich believes it was her late father speaking to her. “I knew, just knew, this ‘Camino angel’ wanted me to know my father was with me.” 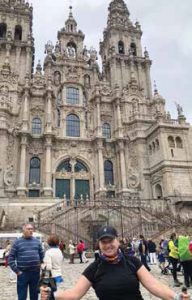 Day 39 at the Cathedral of Santiago de Compostela.

Before sunrise, on day 39, Zdunich woke early, excited to be approaching the city of Santiago and the end of the road. Inside the famous Cathedral of Santiago de Compostela, Zdunich attended three back-to-back masses.

“I didn’t want to leave,” she says. The botafumeiro (a huge incense burner) swung back and forth dispersing the fragrance of frankincense. Zdunich lit a candle. She passed the altar to climb the steps leading up to the enormous brass and gold statue of St. James. Following the pilgrimage tradition, Zdunich embraced the sculpture and thanked the saint for keeping her journey safe.

The journey gave Zdunich both spiritual fulfillment and a huge sense of accomplishment, she says. “It’s amazing how you can take such a big task and, truly, you put one foot in front of the other and the next thing you know — you’ve completed it. Walking the Camino certainly makes you aware of yourself, and how little you need in life — as far as makeup, jewelry, perfume — even food habits. Plus, it’s fun to meet up with people from across the world with the same goals; you realize it’s a small world.”

Sharon Sullivan is a freelance writer for Colorado Country Life from Colorado.